Saturday 01- visited Frank and Mary for a while Stuart and his girlfriend were also there- dropped by Chuck’s place and jawed for a while and he told me that he cooked breakfast over at the community center and he was really tired but he promised Stoney he would cook when he asked him to- went on over to the buffalo folks to have a chat wit Dion who was working there finishing up the new house with Tom and Manuel.
Sunday 02- to dang hot to do anything outside so I played with that old laptop of mine, updated the BIOS to see if the new version would let me boot to CD, but that didn’t work either. Old systems like my Toshiba laptop won’t boot to CD cause there is no BIOS setting for it. Found a program smart boot manager floppy that will let me boot to CD and that bypasses the MBR then I loaded up Puppy Linux 2.0.
Monday 03- started updating my Blog and cleaning up some things- Joel called to let me know that the electric power was down for 2 hours; I am on solar and don’t know when the power goes out- called Kula and talked- it rained and thundered today.
Tuesday 04- Roger T. came by with hamburgers, hotdogs and apple pie, oh my!
Wednesday 05- hot and muggy all day- visited Andrew.
Thursday 06- Andrew came by for a while and messed with computers.
Friday 07- Scott called for my help unloading cabinets from his trailer that go into the kitchen and bathroom, and then we loaded a bunch of stuff that goes to his other property- bout that time Lee’s Daughter got a flat on Winters just down from where we were and we helped her out moving her truck off the road, she had no spare, and gave her a ride to Lee’s and he came back later and fixed it. 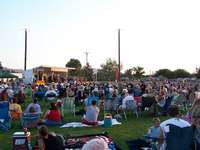 Saturday 08- had to dig up my plants in the front by the road and replant them inside the fence before the critters finish them off- Ron D. and I went to Yucca Valley to their “Summer of Music Festival” and saw the band “Answer”. I saw them last year and as always they were great! I took some great pictures and brought a camera for Ron to use too.
Sunday 09- cleaned the kitchen; its a bi-yearly thing I do- rained and thundered and I saw smoke from a fire in the park down by Yucca, the TV news said they have it done by Tuesday.
Monday 10- called my longtime friend Mike L. who lives in Hermosa Beach, to wish him a happy birthday- went to town to git supplies.

Tuesday 11- The Sawtooth Fire that was started by lightning last Friday afternoon and the National Park Service gave an “Estimated Containment Date July 11, 2006”. Has this Tuesday flared up into a major disaster burning houses around Pioneertown and has provoked mandatory evacuations of Pioneertown, Rimrock and Bowden Flats, Piper Canyon and other communities in the fires path. Last I heard it has consumed around 6000 acres and I can see the flames from my home this Tuesday night and you can see that the setting Sun is “Blood Red”.
Wednesday 12- As of Wednesday morning 30 homes have been destroyed and the fire has now covered over 26,000 acres and Flamingo Heights has been added to the mandatory evacuations list- the smoke from the fire had been going north-east of us but tonight the wind has changed and now we are in a fog of smoke- Stoney called to say he’s back from vacation. Told me about Rufus Stokes passing a week ago; I will write something appropriate for the paper.
Thursday 13- because of the smoke, I stayed inside all day and cleaned the house some more. It is a good thing that I had exercised yesterday- the fire has grown to over 40,000-acre and Governor Schwarzenegger has declared a state of emergency in San Bernardino County where 42 homes and 55 other structures were destroyed.
Friday 14- not too smoky this morning, so I went for my jog and exercised. I spent the rest of the day indoors cause the smoke came back and it got to 110 degrees. Worked on the website and did some cleaning of the computer room- The Sawtooth and Millard fires have merged! Using 2,600 firefighters and many support personnel, with a cost so far at 7.1 million, the fire is 20 percent contained at 62,000 acres destroying 56 homes. The largest fire to hit San Bernardino County was in October 2003 at 91,281 acres and the largest in the state was the Cedar fire in October 2003 in San Diego County at 273,246 acres obtained from the California Department of Forestry Statistics & Events.
Saturday 15- not a whole lot of anything going on except the heat coming in around 113 degrees, and the smoke came back for most of the day. I just stayed inside messing around with my computers and organizing my files- tried several types of Linux on my old Toshiba laptop to find one to replace Win98 and found problems with all: Suse 10.0 couldn’t find the CD but it had to read from it to be able to tell me that, Damn Small Linux wouldn’t find the modem, and Puppy Linux found the modem but I couldn’t find a way to load it onto the harddrive.
Sunday 16- still dang hot! They say that the Sawtooth fire is 35% contained- I called my parents to say hi and see how they were doing- Dale from Landers called and we talked about the fire- Mike from Hermosa called and we jawed for a while- at around 10pm the winds picked up and clouds started to appeared bringing thunder and I could see the lightning strikes in the mountains west of where I am, I hope it doesn’t bring more fires or create mud slides cause I think everyone, including the Firefighters, have had enough.
Monday 17- got a call from Jeff R. wanting to take him to town to get a flat tire fixed. I told him I’d be there in an hour after I exercised- another hot and humid day, so I just messed around with that old laptop trying to find a Win98 replacement, but I have the Win98 running so nice functional I may just keep it as is and move on to other important things-
Linda S. called and we talked about the responsibility folks should take on their own than to wait for the Government to respond to global warming. I believe that we all can cut at least 30 to 40 percent on the amount of resources we consume. We could cut down on the our driving by planning our trips to town: