Monday 01- 66/47 with thick overcast.
I did my stretches, lifted weights, took Cassie for a mile walk, core trainer, and punched the heavybag for three minutes.
I begun to sign and address the “Azure Sea of Dreams” to those of my friends who requested a signed copy and others.
I washed clothes with the little washer and it did pretty well; too bad the sun wasn’t out to dry them.
I took Cassie for her evening walk.


Tuesday 02- still thick with overcast.
I did my stretches, yoga, lifted weights, took Cassie for a mile walk, core trainer, and punched the heavybag for three minutes.
FedEx and UPS brought my new toys today; I had it with Microsoft Win 8.1 and that dang “Charms” thingie that keeps popping out every time I slide my finger too far to the right while I am writing and interferes with my thoughts; some are lost forever. I am switching to a Apple; I got a refurbished 2014 Macbook Air, 11 inch 1.4 GHz Intel Core i5 with 4 GB 1600 MHz DDR3 and a 125GB SSD. (Be sure to turn on the firewall because it isn’t automatically turned on like in Windows). I also picked myself up a refurbished iPad Air 32GB and a iPod Touch 16GB Gen 5 all for a good price.
I continued signing and addressing the “Azure Sea of Dreams” to those of my friends who requested a signed copy and as Christmas Gifts.
Took Cassie for her evening walk.

Wednesday 03- cloudy with drizzles and rain later in the night.
I did my stretches, yoga, lifted weights, took Cassie for a mile run, core trainer, and punched the heavybag for three minutes.
I finished signing and addressing the “Azure Sea of Dreams” to those of my friends who requested a signed copy and others and ran out of books. If I missed anyone let me know and I’ll order more.
Played with my new toys.
Took Cassie for her evening walk.

Thursday 04- overcast and drizzly.
I did my stretches, yoga, and took Cassie for a walk.
I went to the post office in 29 Palms to pick up two packages and send out fifteen “Azure Sea of Dreams” to my Friends as Christmas gifts; I ran out of books and will have to order more, but that will happen after the first of the new year. To send out the books the postal person had to enter each address for each book! This took quite a while and I apologize to those waiting in line behind me. I then went to WalMart to pick up another “Toy” a iPad Mini for me I ordered online and had to stand in line for 45 min before getting service. I talked to people while waiting there which made the time seem to go faster. I then went to get my haircut at the hair cutting place there.


Saturday 06- 61/49 degrees.
I did my stretches, yoga, lifted weights, took Cassie for a mile run, core trainer, and punched the heavybag for three minutes.
I spent the day preparing to travel to Tucson Az. I had everything together by around 9pm, but it was cold and I felt kinda drained and the beginnings of a cold coming on.

Sunday 07- mostly overcast on the way to Tucson.
Cassie and I left home at 8am and arrived in Tucson around 2:30pm.
Me and Kevin had burgers at Carl’s Jr. like we always do when I first get to Tucson.
I went to the rec area to shower and wash the road off me even though I felt a cold coming on.

Monday 08- a little rain here and there.
Not feeling well at all but was able to go shopping with Kevin to get supplies for the my trailer and take Cassie for her walks.

Tuesday 09- I was sick in bed and have no recollection of what happened today. Kevin took Cassie for her walks.

Monday 15- overcast.
I did my stretches and yoga.
Me and Kevin took two large propane tanks to get new valves put on and get them filled up. We hooked up the two tanks to my trailer.

Tuesday 16- rained here and there.
I did my stretches and yoga.
Went to Camping World to get a new level type door lock for the broken one on the rear door and then to WalMart to get some shopping done. 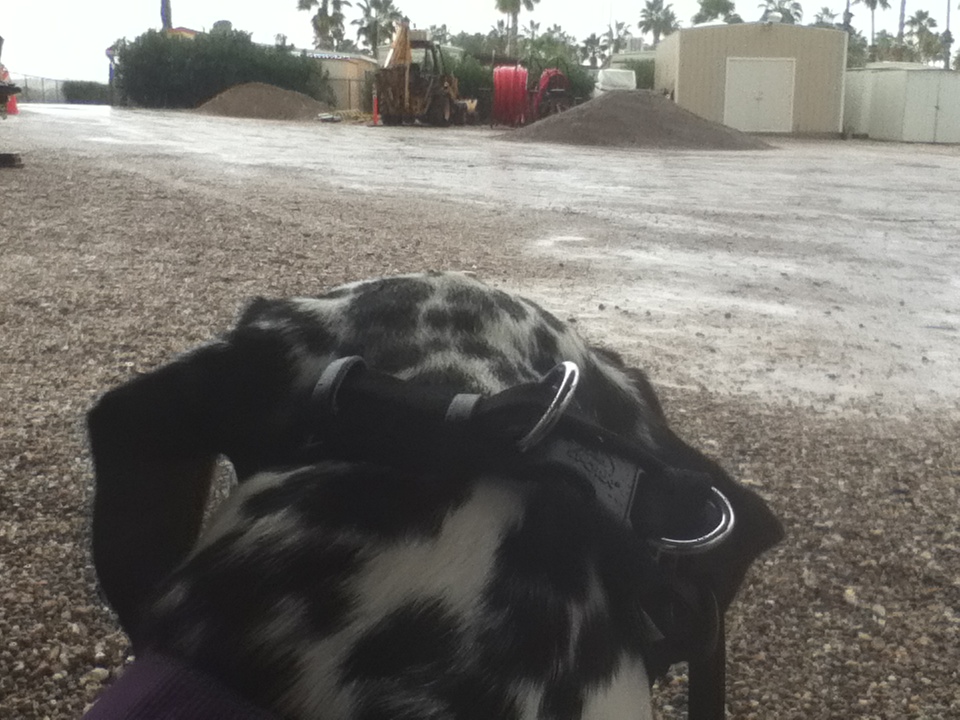 Wednesday 17- it rained all day long.
I did my stretches and yoga.
Cassie and I got stuck in a downpour while coming back from our walk and had to hide underneath an overhead trailer in the storage area.
Kevin and I went to the indoor Jacuzzi and soaked there for a long spell. I then took a shower in the rec area there. I am feeling much better today but still have a running nose. 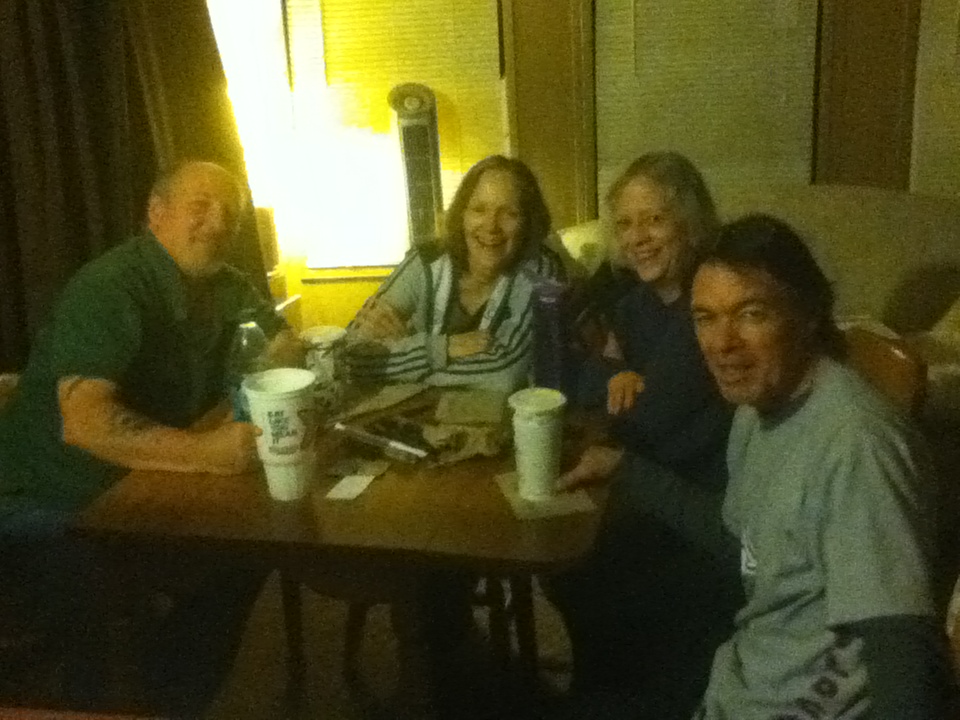 Thursday 18- a nice and sunny day!
I did my stretches and yoga. Kevin and I went to the pool where I swam a couple of laps and the sat in the Jacuzzi for a long spell. Took the bicycles out and road around the park for awhile.
Took Cassie for her walks.
Kevin, Paula and Mark, and Audrey got some Mexican food and brought it back to my trailer and had a most wonderful evening eating and yakking about Family.


Friday 19 and Saturday 20- not sure what I did those two day; probably sitting in the Jacuzzi and watched movies with my Brother like we been doing every night since I arrived in Tucson. We watched every decent movie that Netflix offers and started on the B movies. 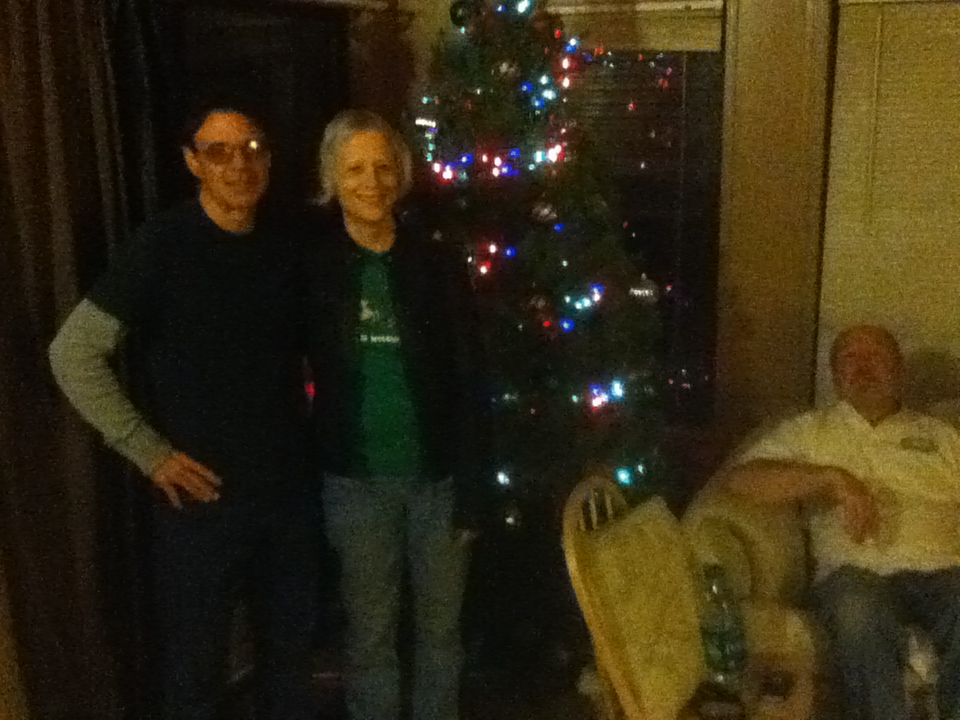 Monday 22- cloudy but nice.
Worked on roof and went to the Jacuzzi.
Me and Kevin went out and bought a Christmas Tree, lights and ornaments to hang on it. We had the tree all done and looking nice, but every time we leave to go somewhere Cassie tears them down. Paula and Mark came by to give my tree a look-see. 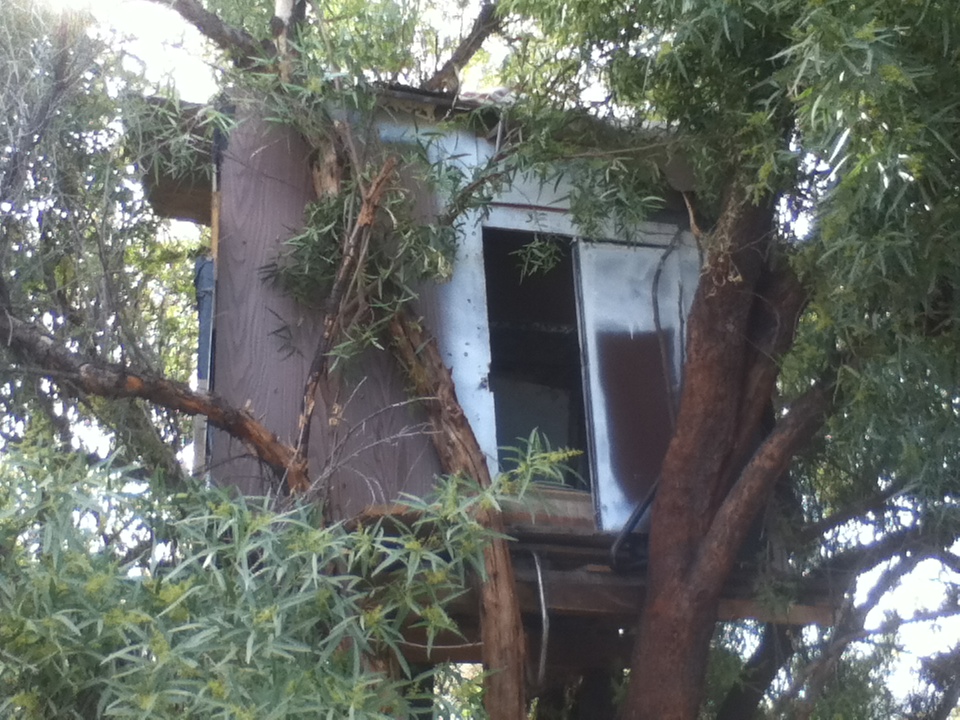 Tuesday 23- sunny but windy and cold.
I took Cassie for a 3 mile walk down the wash that runs by the resort. Checked out the tree house and talked to its occupant Andy who says the city is evicting him. I took some pictures of the tree house. 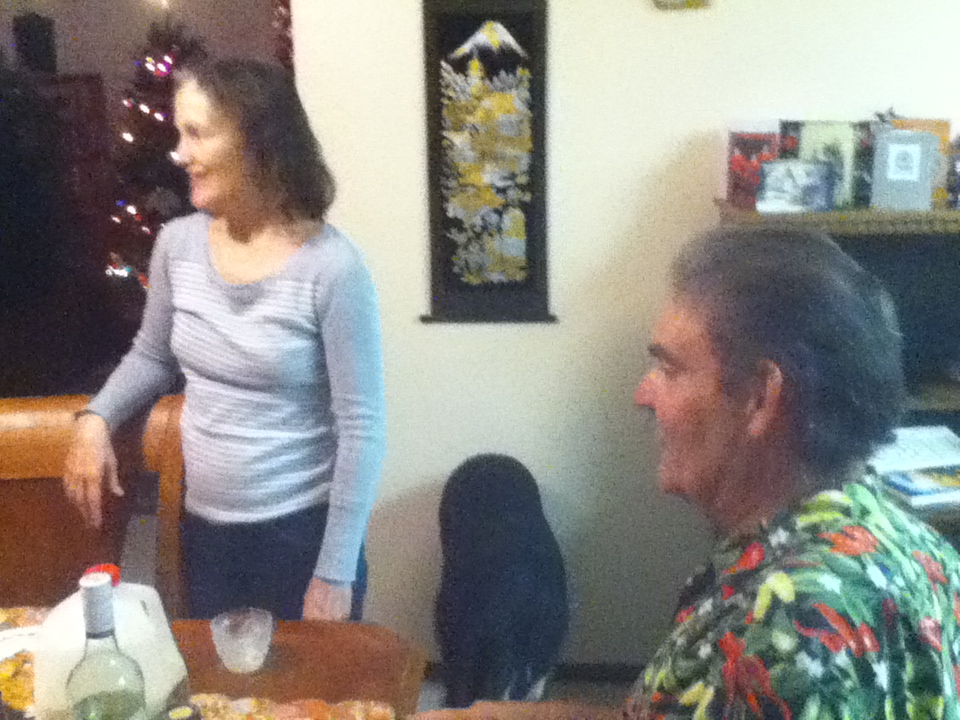 Wednesday 24-
Eggnog over at my sister Audrey and John’s home. 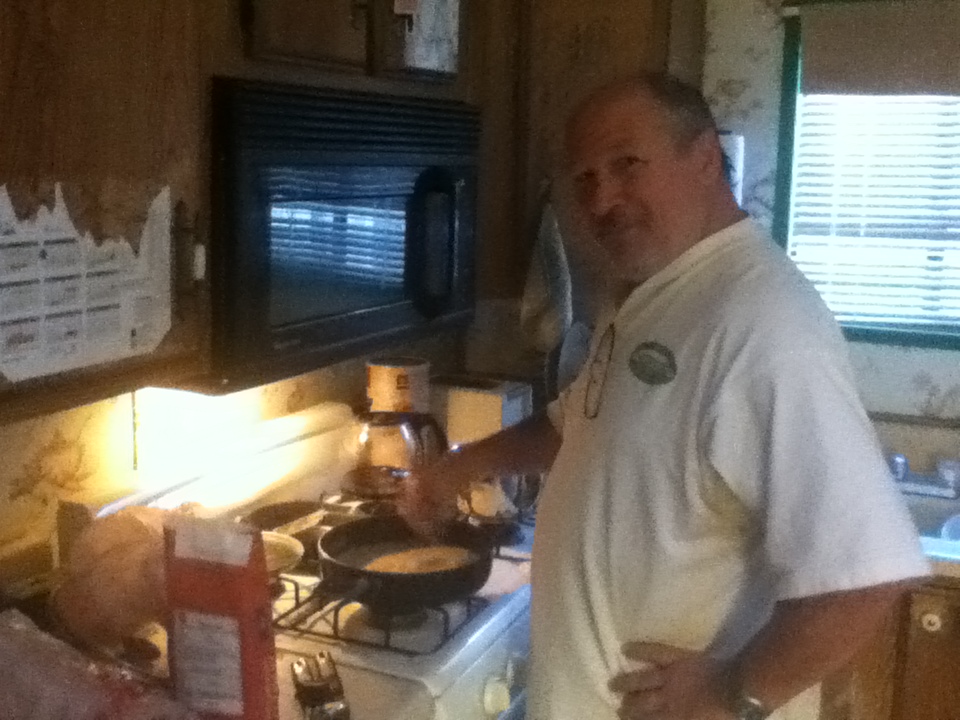 Thursday 25-
Kevin and I actually cooked a turkey with all the works for Christmas. We went over to our sister Audrey's house to visit her and John and their family and ate some smoked turkey. Then later we went back to my trailer for dinner and had enough turkey to last us four more days; I am sick of turkey until next Thanksgiving and Christmas.


Friday 26- sunny but cold at night!
I did my stretches and yoga. Later I did a couple of laps in the pool and sat in the Jacuzzi with my brother Kevin for a spell.
We made two huge turkey sandwiches each and gave some leftover turkey to Cassie.


Saturday 27- sunny but below freezing at night.
I forgot to reset the electric blanket last night both me and Cassie woke up 7am to a very cold trailer. I took her outside so she can do her morning thing and we both climbed back under the covers with the blanket turned up on high.
My brother Kevin came by for breakfast like he always does and I made oatmeal and eggs for us.
I took Cassie for a long afternoon walk. On our walk a lady told me that Cassie barks all the time when me and Kevin leave her alone to go places. I apologize to her and went to my neighbor and did the same, but she said it didn’t bother her; just in case she was being nice I will purchase a small kennel to keep her in the house. I was keeping Cassie outside in the Arizona room that we fortified because every time we keep her in the house alone she tears up stuff and I come home to a mess.
On our way to visit our sister Paula for her to show me how to take care of her pets while she and Mark are gone for six days, we stopped off at Petsmart where I bought a small kennel for Cassie to stay in while I am gone. I will set it up in the house and put some of her chew toys in there for her.
Kevin and I went shopping and ate burgers at Carl’s Jr. and then came back to my trailer to watch some dumb movie.

Sunday 28- 55/26 degrees.
Kevin and I went to get his propane tanks filled and then went to WalMart where I bought some dog food for Cassie and some blue jeans for me. 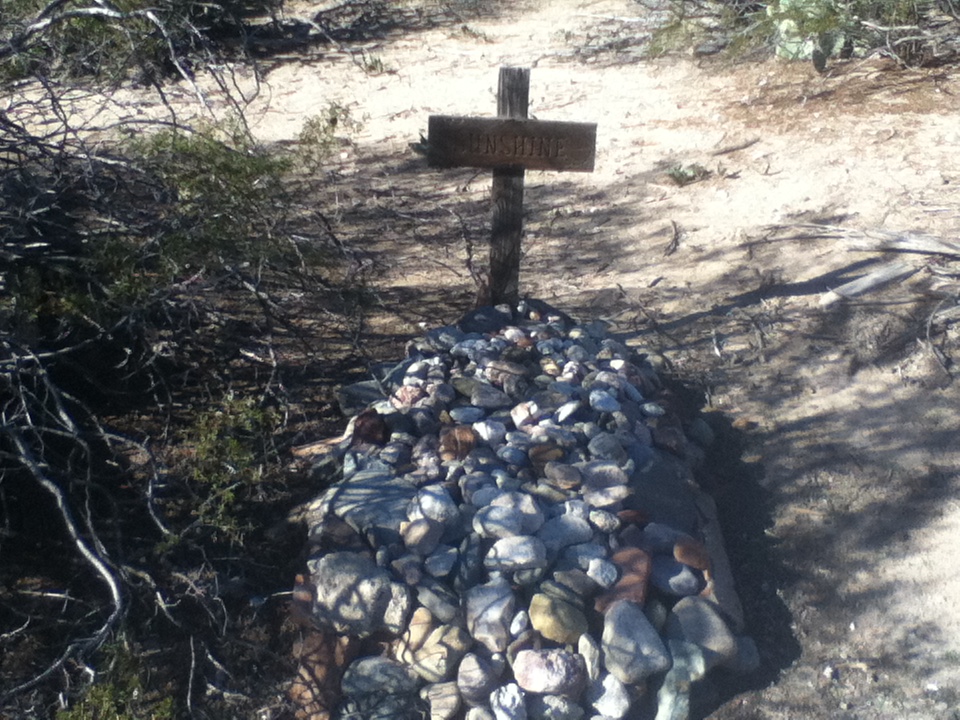 Monday 29- 60/34 degrees Tucson.
I did my stretches and yoga.
Cassie and me went for a long walk in the wash next to the resort and took lots of pictures of the plant life, the tree house, and found a grave I believe belongs to a dog called Sunshine (1977-1990).
I swam a bunch of laps in the pool and sat in the Jacuzzi for a spell.
In the evening Kevin and I rode our bikes around the resort.


Tuesday 30- 56/34
My sister Paula and her husband Mark took a flight out to Florida to visit our sister Donna and then Mark’s Dad who lives nearby. I am now staying at their house to take care of their two dogs Willow and Dingo who love to play fetch. 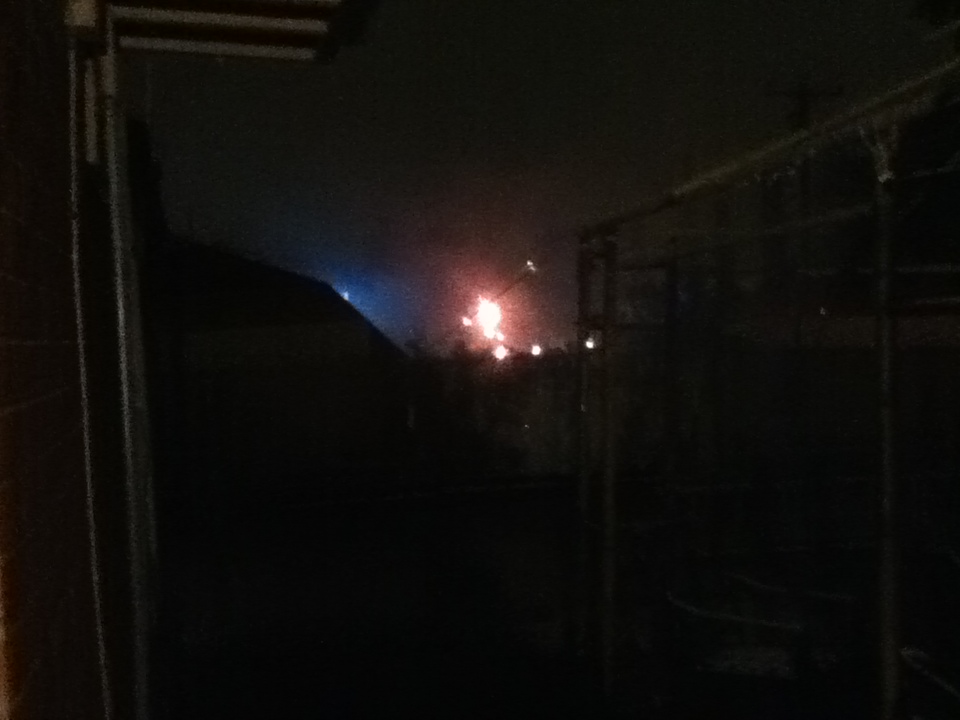 Wednesday 31- snow!
New Year’s Eve was at my sister Paula’s watching the dogs. I brought all three dogs inside early because the whole neighborhood was under attack and bedlam prevailed throughout the city of Tucson. The nextdoor neighbors were trying very hard to blow up themselves and their house. Cassie wasn’t bothered by all the explosions because we live right next to the Marine Base in Twentynine Palms and they blow up stuff all the time. Around midnight it started to snow and I thought that was quite amazing way to start the new year. 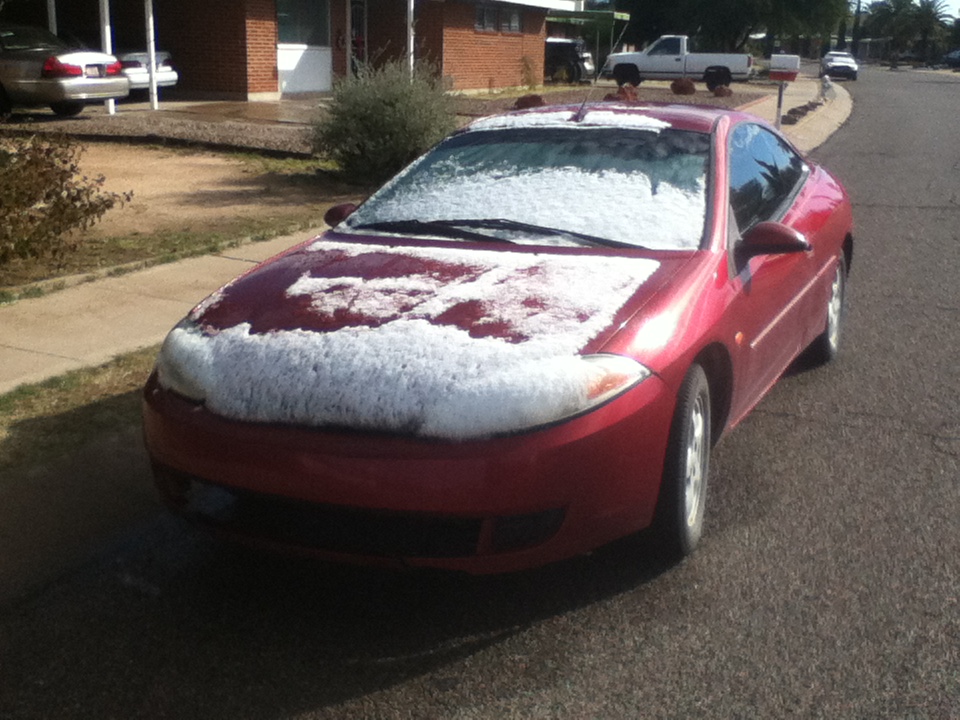 Posted by Bob DeLoyd at 6:05 PM No comments: