Monday Dec. 26- Roger calls to say he is real sick. On the way to get my mail stopped by Lee’s to tell Stu about Wessel’s email and to look at new fountain Lee has on front yard. Wrote my column for the newspaper and sent it in early for the holidays.
Tuesday Dec. 27- Not feeling well; a cold, the flu, an allergy? Went to town and got supplies, gas, and flu remedies. Dropped off chest of drawers and Wessel’s info for Denver trip at Stu’s house. When I returned Sam was at my driveway with his sister-in-law’s computer to fix, a rush job cause she goes back to Carson Thursday. Found that it had only 128megs of ram to run XP. Called Sam later and told him we need to purchase a 512meg from Crucial.com, he said ‘go ahead’, and had it shipped overnight delivery. Stoney dropped by after bingo with pumpkin pie.
Wednesday Dec. 28- Mostly worked on Sam’s sister-in-law’s computer. Loaded Avast anti-virus and Spybot and found all kinds of Trojans and Spyware. Decided get an ok from Sam to scrap the whole OS and do a reinstall of XP. Sam says, ok.
Thursday Dec. 29- Scott comes by at 9:30 am! Looking for some help finding an address on Lear ave. I go, we find. 10:30am UPS here with 512meg memory. I reinstall XP and backups on Sam’s computer. 4:00pm Sam here for computer, and all work on it is done. Buffalo folk bring by some ham soup, yumm. Finished book “Gateway” and started second book in the series “Beyond the Blue Event Horizon” by Pohl.
Posted by Bob DeLoyd at 12:45 PM No comments:

Wednesday 21- Jeff Reed called and needed a jump for his truck. Got mail and on the way back visited Roger Toomes for a while and saw his new color laser printer. Ten I stopped by Lee Hines and met Erick, who helps out at the center, and his two sons who were running around the yard. Sat around and jawed for a few and Marcie served us up some toquetos with avocado dip. Left the Hines and dropped in on the Buffalo Gal. Nice warm day!
Thursday 22- Did the full exercise routine and boy am I tired! Did the wash, watered the plants. Stopped by the Buffalo folks and they gave me a small Christmas tree. Stuart Watson came by that evening and we talked about gals and the lack of them out here. Jeff came over too, and brought back the eMac I lent him.
Friday 23- Stoney dropped by with those cookies he made. Finished the book “The Road Ahead” and started reading one that Jeanne Kula gave me “Howard Hughes The Secret Life” by Charles Higham.
Saturday 24- Mac McDermott invited me over for dinner with him and his family. I brought over the computer that I promised Dennis his son. Spent most of the day over there and on the way home noticed that Stuart was home and dropped in. Had five phone calls on the answering machine when I finally got home.
Sunday 25- Christmas! Called family and friends and wished them a merry Christmas. Stopped by the Hines’s to drop off my gift to them. Lee was ailing in bed with a bad back, I didn’t see him, and so I took some pics of Marcie by their Tree. Had my Christmas dinner at the Buffalo Folks home, they are sure mighty fine people.
Posted by Bob DeLoyd at 10:01 PM No comments:

Car crash update and other stuff

Janis Watson Robertson, 46, of Joshua Tree who had a fatal crash, she was not wearing a seatbelt and was ejected from her car as it overturned, on Coyote Valley Road. I was told that she was a caregiver for Fred Frederiksen for many years (14yrs?). Folks erected a cross made out of 4 by 4’s to mark the site of the crash.
My friend Joel who lives down the road has taken ill with the flu. He was so sick he couldn’t get out of the bead to answer the phone and now I know why he didn’t return my calls. He almost went to the hospital he said. I guess the flu season has arrived.
John Massey is back at his home after a few years working out of state. He has a lot of work on the old place cause it was used as a dog shelter by the lady he let stay there while he was gone.
I went to town this last Tuesday and that makes twice in one month!

I use a backpack to carry my stuff with lots of pockets (started carrying one in college) to put my cell phone, pda, wallet and other stuff like a coin bag, eyeglasses, notebook (the kind ya write in with a pencil), radio, a few protein bars, and a small first aid kit. And I am 54yrs old.
And here a comment for your "How Geeky is too Geeky" When I am at the checkout at a store and while the store's computer is processing my credit card I say "working...working" like the old Star Trek computer. I get some strange looks from the clerks!
Posted by Bob DeLoyd at 11:12 AM No comments:

On keepin my blog current

My friend Tom Merritt told me the other day when he was asking my expertise on a computer matter that I haven’t kept up on my blog, that the last post was in Oct. So this is my attempt to update and keep it current.
I was awaken by my fat cat who I let stay inside during the winter months. After I let him outside I went back to bed (I am a creature of the night), it was only 7am! I was awoken again at 10:30 by a phone call from Roger Toomes asking me if I heard the news about a fatal car crash on Coyote Valley Road Wednesday around 2pm. I didn’t I told him but promised to listen later on when the news comes on the radio.
I did my exercises; jogged 3.5 miles, lifted weights, and rode the bike about a mile. I try to do this everyday. It took an Hour and a half today. Yesterday I took my neighbor Anita who lives down the road with the Buffalo to town to get her boyfriend Scott a Christmas gift. Boy she sure can nag a lot but it was great fun and it took the whole day so I didn’t do any exercising that morning.
I called Stoney around 3:30pm to see if he and Lee had picked up an old tractor he had purchased, but Lee’s back was out and they couldn’t do it and will wait till next week.  He mentioned that if he can git the energy to git out of his chair he will go into the kitchen and bake some cookies. I told him to burn a pan for me; I like burnt cookies for some reason.
I caught the news at 4pm on Z1077 and they said that yes in deed there was a crash and that a lady, Janet Watson, was killed. I don’t know if she was speeding or what, but it is a shame that it happened so close to Christmas and that her family has to deal with it at such a time. Janet was only 46 years old.
After the news Joel Levy showed up with spaghetti, made from all things, Barbeque sauce! It was good and we ate it all down.
I spent the rest of the night updating my computer’s software and reading. One is by Bill Gates called “The Road ahead” which was published in 1995 and is already outdated with most of the predictions of Bill Gates coming to pass. The other book is by Frederik Pohl called “Gateway” which I have read many times and love.
It is 12:30am Friday now and I just checked the temp which is at 29 degrees! It’s good to have a woodstove!
Posted by Bob DeLoyd at 1:38 AM No comments:

A well known company recently had a confidential memo revealed which boiled down to cutting health care costs by discouraging unhealthy folk from seeking jobs at its stores and hiring more part-time student workers. I read the memo, and to be fair, they are trying to deal with a system that is broken, the U.S. health care system. If you get hospitalized in the U.S. ( Unless you’re a wealthy Saudi waiting for a transplant ) you’re pretty much on your own and at risk of losing your home, car, and any savings they can get at, even if you have health insurance. There are more bankruptcies from medical reasons than any other. It amazes me that people illegally sneak into the U.S. and receive health care which is paid for by our government and people who live here have to go there to obtain affordable care. Is Universal coverage the answer? Maybe Hillary was right in 1993!

Posted by Bob DeLoyd at 8:24 PM No comments: 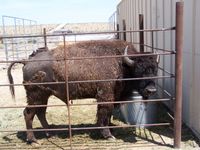 Our little Community is now where the Buffalo roam! Our neighbor Scott Sorensen recently brought two buffalo from Catalina Island to his property on Winters Road. Dang I got to tell ya them critters are massive. The big one Scott calls Chief is gentle but he can stomp ya by accident. Scott also has two hogs and two calves. If he gits two more of anything else I am going to watch and see if he starts laying a keel for an Ark.

Thought for the week: Don?t take sides between friends. 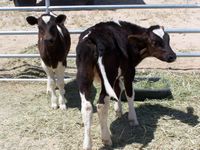 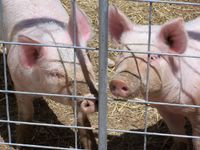 I just got back from a mini-vacation to the South Bay where I took care of my friend’s, Jeanne Kula and Tom Merritt, cats at their nice home located on the hillside of a canyon in Palos Verdes. I visited some old friends and old haunts while I was there. A lot has changed since I’ve visited some 5 years ago: more people, more cars, and more buildings.
I had parked by the ocean to watch the sunset, but when I prepared to leave my truck wouldn’t start. I called a towing service for a jump. In a while a tow rig arrived and a beautiful Goth lady stepped out of the cab and gave me a jump. I said to her,’ pardon me but I don’t want to sound sexist but I’ve never seen a women tow truck driver before.’
It was nice to git away for a while and git a new perspective on things. As I returned to the High Desert I smelled the distinct fragrance of the Grease Woods on a rainy day and I knew I was coming home.
Posted by Bob DeLoyd at 12:11 AM No comments: 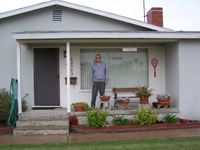 My Dad the Tennis Pro in front of the family home. 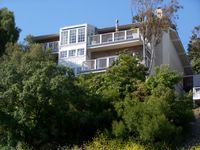 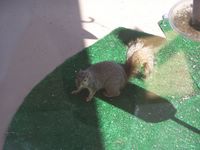 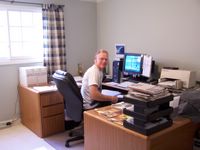 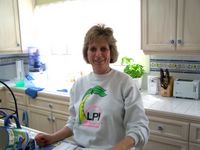 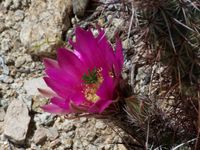 A cactus flower on the trail in 49 Palms.

Posted by Bob DeLoyd at 2:41 PM No comments: 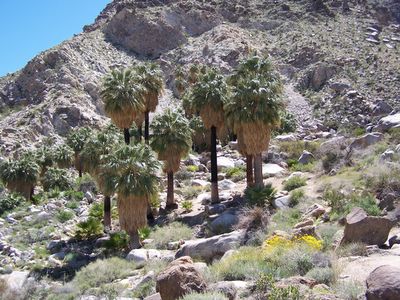 My friend Ron Dehart and I took a hike over to 49 Palms Oasis. Its around 3 miles round trip, but seems farther. There are many Barrel Cactus and wild flowers scattered over the terrain, so be sure you take a camera. The nicest part of the hike is when you finally arrive at the Oasis where there are pools of water and a very small running creek to soak yer feet. Hiking time is about 2-3 hours, more if ya stop and take a lot of pictures like we did. Starting point is the parking area at end of Canyon Road, 4 miles west of Twentynine Palms off Hwy 62.

Posted by Bob DeLoyd at 2:28 PM No comments: 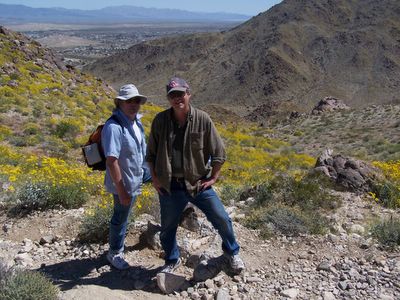 Me and Ron Dehart on the trail in 49 Palms

Posted by Bob DeLoyd at 2:19 AM No comments: