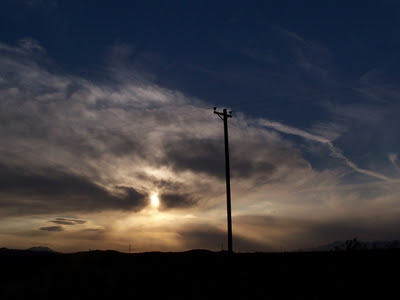 Monday 01- Welcome to the month of January and the year 2007- did my stretches, ran a mile, lifted weights, and rode my bike- called some more folks to wish them a Happy New Year- 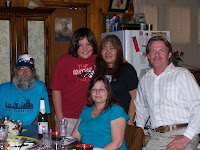 was invited over to Mac’s home for some sushi and met Clint and his wife Cindy. The food and the conversation were enjoyable. I wondered why everyone had their shoes off. Mac said it’s a custom in his household to take your shoes off, I told him I was being polite to everyone keeping mine on- went for my evening walk- called Stoney and he told me that the USDA food distributing will be on the 8th of this month because of the King holiday and I need to correct it on my website- did some reading in history and started reading (again) “365 Starry Nights” by Chet Raymo, which will take me one whole year to read (just like last year)- started writing my column for the newspaper. 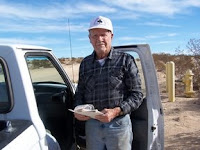 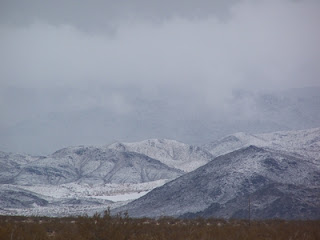 Friday 12- it is snowing outside at 9am! I grabbed my camera, took some pics and video of the snow cover desert- Ed D. called to tell me that Delores Jefferson has recently passed on. I updated the newsletter and sent it out and also posted it on my website that she had passed. I had last talked to Delores back in December. I called Ruth T. to let her know. I may go down for the service on Sunday with her- did my stretches but too dang cold to do any other exercise- 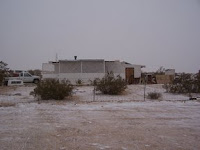 went to Stoney’s to help him with his new camera and load some software on his computer. We had meatloaf with mashed potatoes and gravy. It was very, very cold riding my “Trusty” scooter back home- Roger T. picked up some software I burned on CD for him and left some movies for me- Mac and then Joel called for computer help and resolved them over the phone- Linda S. and then Linda D. called about the community meeting tomorrow- my dear friend Terry Watson called and we jawed about this and that and other things for 164 minutes- did computer work the rest of the night.
Saturday 13- did my stretches, very cold outside so I just lifted weights- Carolynne Hansen called and told me that she was a dispatcher for the Fire Department back in the late 60s, early 70s and had some stories about the old lake and also from the area around these parts. We jawed for a while and since she had much information said she’d write up what she can remember and email it to me. Nice lady- I setup my new printer and printed a picture of Judith that she wanted that I took at potluck of her and her mother. Looks really decent- Mac brought back my old Toshiba laptop I had lent him when his was down- watched “Rosemary and Thyme” on PBS- tried to do another recording of “Love Will Find A Way Home” but I couldn’t get the recorder setup right and it sounded lousy, so I will try again tomorrow- forgot to tell ya all yesterday that when I went outside to use the outhouse that I had found snow inside of it and when I sat down to take care of business, the lid stuck to my butt it was so cold! 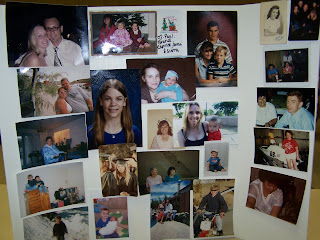 Sunday 14- still very cold this morning, 35 degrees at 10am, so I just did my stretches- Ruth Tuttle picked me up and we went to Delores Jefferson’s services at Mountain Valley Memorial Park and then to lunch held in her memory at the Joshua Tree Community Center- on the way home we saw a house fire on Ritchie Rd. and Giant Rock that was totally engulfed and burnt to the ground. My friend Dale who lives just a few yards away from the fire called and told me later that he saved the 89 year old lady that lived there. The lady is fine and the Church she belongs to is taking care of her- watched “24” on FOX- worked on my computer and started planning my column for next week.
Monday 15- 29 degrees with winds of 7-15 mph, so I only did my weights and stretches mostly inside- called Delores Jefferson’s son John and interviewed him about his Mother for my column. It was a very difficult and emotional interview to do, for him and for me, but we were both glad to do it- Stoney picked me up and took me to his home where we messed with his new camera, worked on the computer, and had stew with baked with dough on the top, very good- worked on my column most of the day and took a break to watch “24” on FOX and then continued to write and edit column- fished my column and sent it out to the newspaper.
Tuesday 16- got up to 40 degrees, no wind, so I ran a mile and lifted weights- almost all my plants are dead from the freeze. My Alavera plants that I blend in my breakfast drinks are froze, my Palm Trees look wasted, and all the flowered plants took a dump- worked on the computer some, found that I’d misspelled a last name in the column I wrote and had to correct it and resend to the newspaper- Linda D. called and asked me to come over to fix some problems on her computer. Was working diligently on her computer when I noticed that it was 4:25pm and I was suppose to meet Stoney outside my house to give him the picture I took of Judith and Juanita so he could give it to her at Bingo. Well I finished at 5:30 and Linda drove me down to the center to give them the pic and tell Stoney I’m sorry for not being there when I said I’d be- watched “NCIS” on CBS and then surfed the web.
Wednesday 17- cold and windy, temp in the 30s, did my stretches and lifted weights- did some cleanup inside and outside the house. Started pulling all those telephone numbers and addresses off envelopes and tiny bits of paper and putting them on my computer- did a clean and defrag on the old Toshiba laptop- went for my evening walk (finally)- watched “22nd Century” on PBS. It was about the wired brains and networking them together- worked on my blog and answered emails and helping my friend Kula figure out a way to transfer her address book to Gmail.
Thursday 18- I have never seen it this cold, lasting this long, since I’ve moved here in 1998. Well I really don’t want to run in the cold cause it hurts my right knee; seems that my hamstrings tighten up by the cold, so I just did my stretches today- loaded 2006 edition of Encyclopedia Britannica (3 gigs) onto my laptop. Lots of good stuff on it and don’t need to be online to use it- went to Stoney’s and had lunch, a salad, and messed around with his camera and installed Charlie on his computer- read some History; Alexander the Great and ancient Greece- watched “CSI” on CBS- worked on computer stuff.
Friday 19- cold, windy and cloudy day, so I just did my stretches- updated the website and sent out the newsletter- Annalice called to cancel our appointment for me to repair her computer, so now I have some time to kill- fixed Kula’s email problem by having her send me her address book in CSV form, but it arrived in WAB. So I just imported it into my Outlook Express and then logged into her account and imported it into Gmail- tried to get some files off my very old HP 200LX palmtop to no avail. I tried the IR between several devices and even put the PCMICA storage card from the HP into my laptops, nope ain’t going to happen. Will try and come up with something later- went for my evening walk- spent the rest of the night catching up on my reading (History, Astronomy, Geology, Meteorology, and Biology) and watched a online Biology class from Berkley. 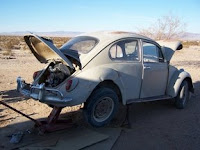