Welcome to the Month of March- The wind has settled down a bit from yesterday, but there is still a stiff breeze and the temps never got above 60 degrees.
I lifted weights and did light stretching because of my hip sprain which is feeling better, but I’ll stay the course and favor it for a good week and not do any running and definitely no bicycling where I believe I got the sprain when I powered up the hill like I’ve never done before, outside my house.
I spent most of the day writing a response to an article in the local newspaper about the City of Yucca Valley town council voting to take all the Block Grants themselves and not sharing it with their rural neighbors; which Copper Mountain Mesa, where I live, is one. Got me pretty darn upset!

Friday 02- Ah, a nice day outside!
I did my stretches, lifted weights, core trainer, and punched the heavy bag.
I updated the Copper Mountain Mesa Website and sent out the Newsletter.
I was almost done doing the above when my neighbor John Massey came by to punch the heavy bag. He said he really needed boxing gloves because it was hurting his hands which he had broken many times before, he said. I’ve been thinking of getting some gloves myself and called up Big 5 in Yucca and they did have boxing gloves. They did. So we took his truck to Yucca and did some minute shopping at WalMart and Staters Bros and then headed over to Big 5 and I purchased the gloves.
I went for a short walk that evening. Then I settled down to watch a new episode of “Castle” and “Endgame” before going on FaceBook.


Saturday 03- It was another nice day with temps up to 70 degrees.
John Massey came over and we both beat the hell out of the heavy bag using the new boxing gloves.


Sunday 04- Okay, the weather is wonderful outside, what gives?
I went over to Linda and Blake’s house.
I watched “Fringe”.


Monday 05- It is a beautiful day. The sky was overcast for most of the day, but still it was pleasant.
I did my stretches and ran a mile.
I did my studies outside.
I went for a walk listening to Astro 7B lecture #11 by Joshua Bloom.


Tuesday 06- It is mighty windy but not too cold. The winds must be gusting up to 60mph!
It’s too windy to do a run, but I did my stretches, lifted dumbbells, core trainer, punched the heavy bag, and lifted weights.
Jimmy called to tell me his renter said that some of the roofing is coming off Stoney’s. I called John Demers but he already knew about it.
I watched “Endgame”. I subscribed to Netflix for a free month and watched “Unlimited”.

Wednesday 07- Another windy day and cold too!
I did my stretches, lifted dumbbells, core trainer, punched the heavy bag, and lifted weights.
I did my studies.
I’ve been watching a lot of episodes of “Monk” on Netflix.

Thursday 08- Still a lot of wind.
I did my stretches and ran a mile.
Kelly and I drove to 29 to do a little shopping. We ate chicken from Stater Bros at her house.


Friday 09- The wind has died down and it’s a beautiful day.
I did my stretches, lifted dumbbells, core trainer, punched the heavy bag, and lifted weights.
I updated the Copper Mountain Mesa Website and sent out the newsletter.
I did my studies.

Saturday 10- A little breezy today, but nice.
I did my stretches and ran a mile.


Sunday 11- A very nice day!
I did my stretches.
I called Family and Friends. I might have talked too long to one of them…
I watched “Serenity” (2005) on Netflix. 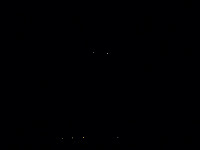 Monday 12- Another very nice day with temps into the high 70s.
I did my stretches, yoga, lifted dumbbells, rode my bike, core trainer, lifted weights, punched the heavy bag, and ran with weights.
I did my studies.
I went for a walk listening to Astro 7B lecture #12 by Joshua Bloom, about: Change of state of the electron in Neutral Hydrogen, in clouds, creates radiation at 21cm or 1420Mhz.
I watched lecture 22 on the Berkeley biology course about: Viruses, Bacteria, Plasmids, and Transposons.
I went to the Neighborhood Watch meeting at 5:30 and stayed for the community board meeting that started at 7pm. Got back home a little after 8pm. Both meeting went well. At the NHW meeting, we’re still getting our rules and procedures in order. At the board meeting, we discussed ways of getting more members and volunteers, also discussed Yucca Valley taking all the Block Grant monies.
I spent a good hour out in the yard doing a little stargazing. Mars was at oppositions on the 3rd and is shining brightly about 60 degrees above the eastern sky. Venus and Jupiter are almost in conjunction (March 14th), hanging together in the western sky. Venus is the brighter of the two. 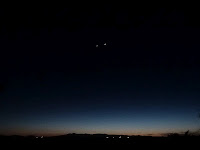 Tuesday 13- A few clouds but otherwise it was rather pleasant.
I did my stretches and ran a mile.
I went for a walk listening to Astro 7B lecture #13 by Joshua Bloom.
I watched lecture 23 on the Berkeley biology course about: More about hydrogen, dust, and the creation of stars from that dust.
I took another picture of the Venus and Jupiter conjunction.


Wednesday 14- The weather started out nice but grew cold and windy as the day progressed.
I did my stretches.
I was suppose to take Kelly but couldn’t get a hold of her yesterday or today, so I thought I ought to go over to check to make sure she was okay. She had slept for the better part of the time and I stayed for a long spell yapping with her.


Thursday 15- A very nice day outside.
I picked up Kelly and we went into Yucca Valley to do some shopping. We had lunch at the Sizzler and our server was a guy called Matt.


Friday 16- Hazy skies outside today.
I did my stretches, lifted dumbbells, yoga, core trainer, ran a mile, lifted weights, rode my bike halfway up the hill, and punched the hell out of the heavy bag.
I did my studies- need to get caught up on them.
John Massey came by with his friend Richard to get the papers for the Jeep I was trying to sell for him on Crag’s List. I didn’t think I had them because I don’t keep stuff like that for other folks, but searching later I found them and called John I had them.
I updated the Copper Mountain Mesa Website and sent out the newsletter.
I went for a walk listening to Astro 7B lecture #14 by Joshua Bloom about the Milky Way.
I watched lecture 24 on the Berkeley biology course about:


Saturday 17- Very windy with some rain.
It’s Kelly’s birthday today. We went to Stater Bros. where I bought cake and ice cream. She cooked up a great dinner of top sirloin and gravy with potatoes. We watched a move “Season of the Witch” (2011) on Netflix with my iPad.


Monday 19- The weather is still cold and windy, but there are clear skies overhead.
I’m still sick. So I just stayed in bed mostly watching a few science videos on YouTube.


Okay, the rest of the month I’ve was still sick and when I’m sick, especially with a headache, I don’t feel like doing anying. I even turn off the ringer to my telephone. I mostly watched “Monk” and a few movies everyday. I spent too much, way too much time on FaceBook; that will have to stop! So don’t expect much to read here…

Wednesday 21- I’m still sick.
I had to go to the post office to pick up a package.

Friday 23- Just wanted to stay in bed today.
I took Kelly and her cat Calypso to the veterinarian, post office, and onto a sandwich shop in 29 that served falafels; never had one, tasted mighty fine.

Monday 26- The weather cleared and I felt a little better so I did some light exercises; stretches, yoga, dumbbells, core trainer, punched heavy bag, went for a walk, and rode the bike partway up the hill.

Tuesday 27- I’m still ain’t feelin’ well…
The weather was great so I drove to WalMart for some 12hr nose-spray, then on to Stater Bros to get some supplies.

Thursday 29- I did a few light exercises.

Friday 30- I updated the Copper Mountain Mesa Website and sent out the newsletter.


Saturday 31- Very windy today.
Annelies sent out an email titled “Tragic News from Copper Mountain Mesa… Bill and Elizabeth Treas lost their youngest son David, in a tragic accident last Wednesday morning... The Treas are holding a Memorial/Celebration of Life get-together at their Home in Landers, tomorrow Saturday March 31st, from 12noon.” I remembered I had some pictures of 2yr old David I had taken at a couple of our Potlucks; Bill had once asked me for a copy a year ago or so. I needed to rush, it was already 11:30AM. I spent the next hour searching through my picture files until I came upon about twenty of them. I burned them to CD and called Annelies for directions; she wasn’t home, dang. I had a hunch and went to the Hi-Desert Star website where I found an article that contained the approximant address and then look it up in Google Maps. All I had to do was drive to that block in Landers and hunt around for about 15mins before I found the place; there were many, many people there. Annelies, Patrick, Chris Jonas, Marcie and her son were there. I gave the CD to Bill and told him how sorry I felt for his family. Before I left I told Chris I wasn’t going to Potluck today because I’ve been sick; he said he’d drop me off some leftovers, which he did a little after 5pm. All in all, I spent about a half hour there and was glad to get back home and covered up in bed.
Kelly’s wonderful cat Calypso has passed on and Kelly is mighty upset right now. At birth Kelly had to breathe life into the stillborn baby kitten, and held that same cat 12 years later in her arms as Calypso gave her last breath.
Clint, my nephew and a Marine, is coming back from Afghanistan tonight around 11pm. Audrey and John drove from Tucson to San Diego to see him.
Goodbye to March! I hope I get over this cold or whatever it is in April!!!