The Bus ride to and from Tucson, Tampa Florida and then back to Tucson 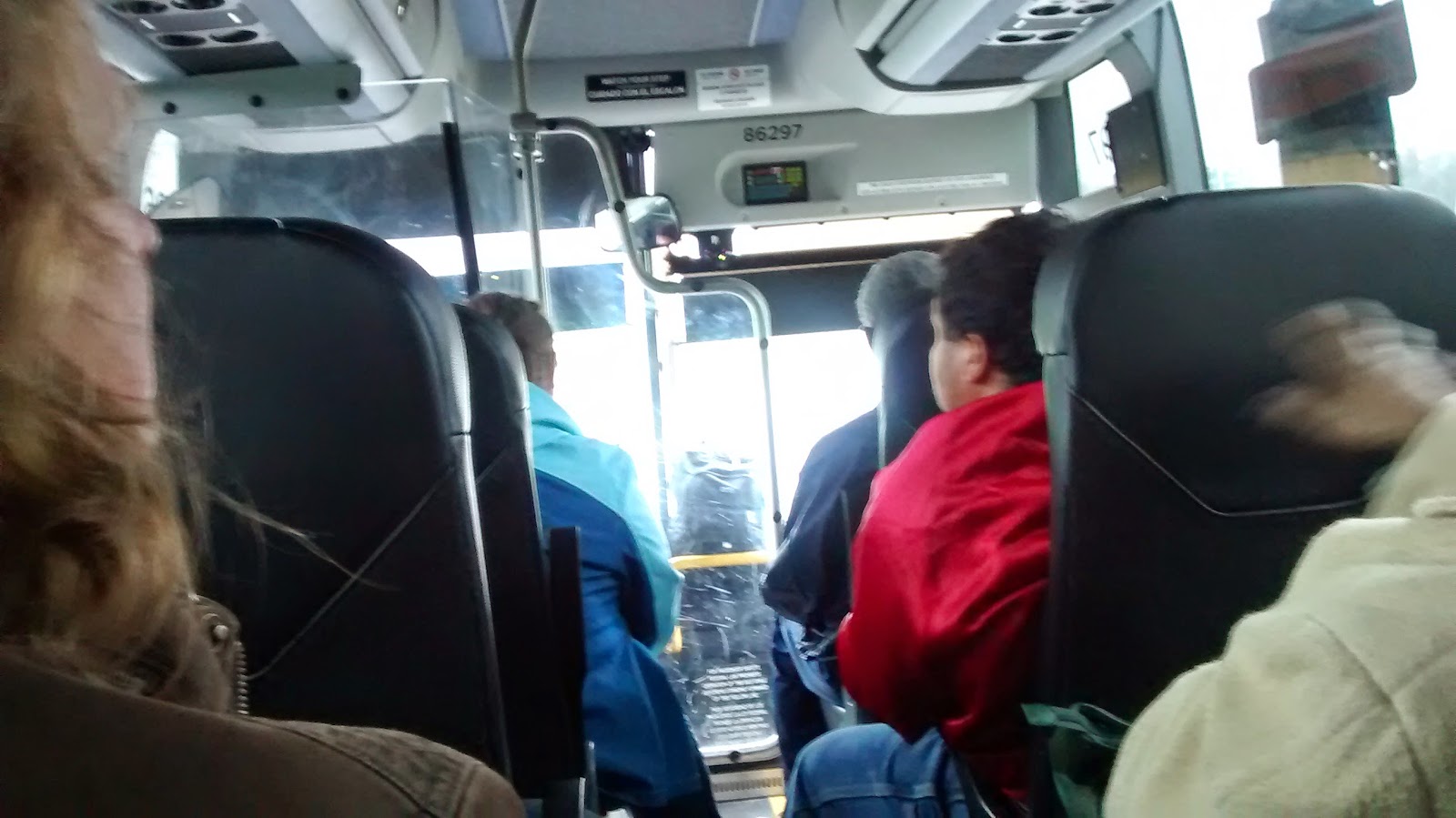 The Bus ride to and from Tucson, Tampa Florida and then back to Tucson was an experience because of all the delays caused by the winter storm Thor and I was only able to catch catnaps here and there along the way. we were woken up in the middle of the night by some kinda federal police who came aboard carrying weapons and asking us what country we came from; everyone (even the folks who didn’t speak English) answered “The United Stats of America”. Interstate 10 was closed down on our way to Dallas and we were awoken again and put up at a hotel somewhere between here and there. After trampling through a quarter mile of snow and slush we arrived at the hotel; I don't know why the bus driver didn't park closer. It was two people to a room and that’s when I met “The Supreme Leader” who was to be my room mate. In our room he told me about how he was going to build his empire in Tucson and spread his kingdom throughout the world. He wanted me to be his political adviser and ambassador to the USA and probably the whole world for that matter, but all I wanted to do was go to sleep at the time. He kept persisting and asked me if I was married and had any kids- I said no. So now he wants to send me to Malaysia to get married to a couple of women and have lots of children; like I can see this really happening. Somehow I loss track of this empire builder when we got a call on our room phone saying our bus was leaving.
There were two buses now and we were told that the other bus would be leaving sooner than the one we were on and if anyone wanted they could switch and arrive at Dallas sooner. I decided to take advantage of this and was first in line to board the other bus, but then I noticed the driver having problems started the motor, so I left and boarded my original bus. The driver never did get that bus started and all the people on that bus had to board our bus now. There were too many and we were asked if there would be volunteers to stay behind; I wasn’t one of the eight who stayed behind.
We finally made it to Dallas or was it Huston, and stayed there for about ten hours or so. This is where I met “The Stranded Young Woman” who started out from some northern state, I think it was Nebraska, and gotten stranded in Utah because of the winter storm for a few weeks in a hotel paid by Greyhound. She was supposed to be home on January 27 and here it is already late into February, so I didn’t feel so bad about the delays and having to change my hotel reservations several times.
The rest of the trip to Tampa Florida was okay getting catnaps and listening to lectures on my iPod until we arrived at Tallahassee where we were treated very unkindly by the so called “Home Security” who made us empty all our luggage and then lineup on a yellow line which was in the way of the workers trying to load and service the bus we were to board; I and others got bummed several times by the workers. 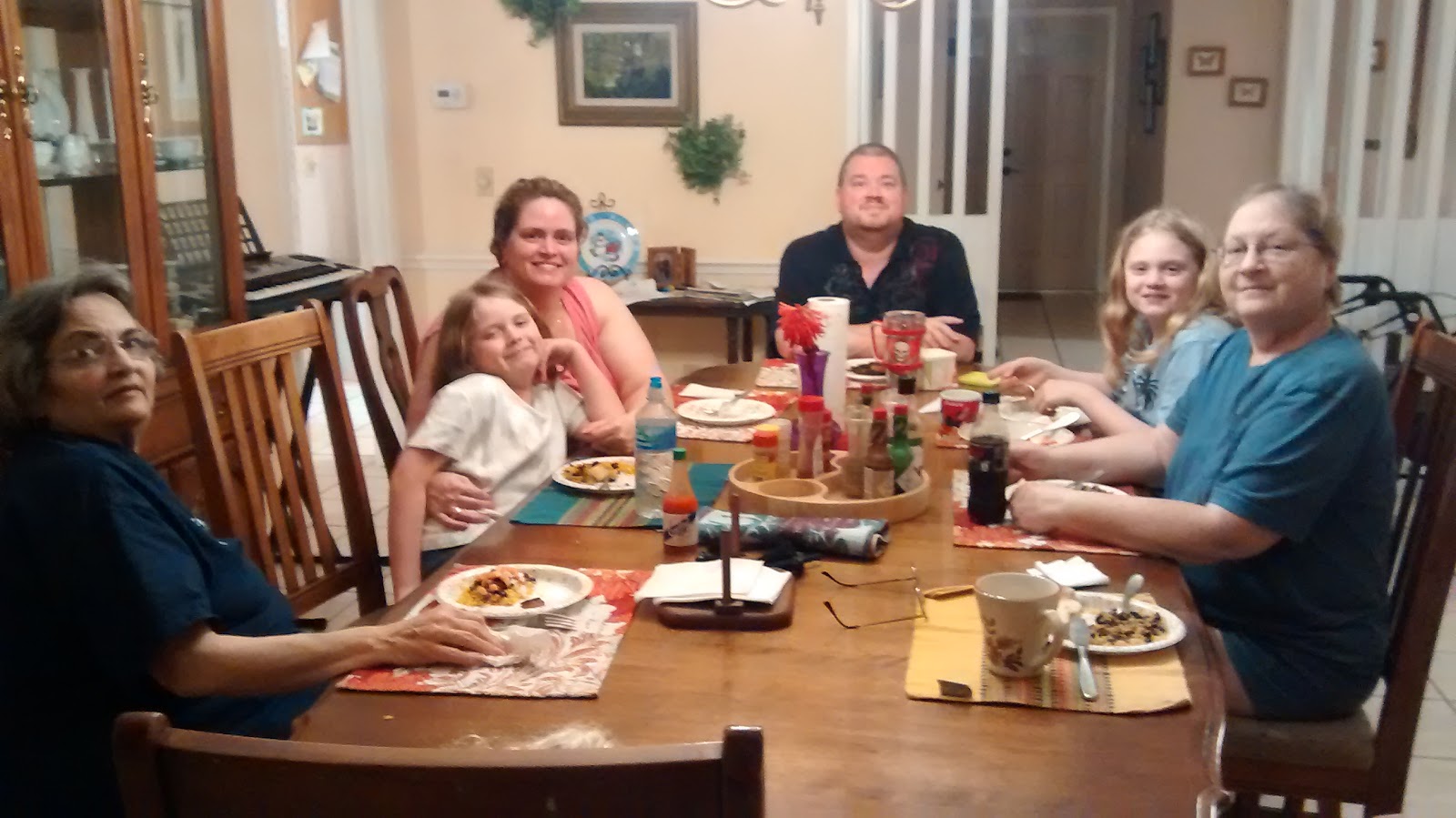 Finally I arrived at Tampa for a visit with my sister Donna and her Family there:  her husband Roger (who was away on business), her son Mitch, Mitch's wife
Frances, their oldest daughter Sarah - she's 10, youngest daughter Laura - she's 7, and Frances' Mom Louise. I had a wonderful stay there and was fed some mighty fine Cuban cuisine for dinner cooked up by Louise.


The Hotel:
My first room was near a stairwell where there was traffic all night. The room also smelled and I was looking for body chalk outlines on the rug. I asked and was moved to another room; the heater didn't work, the faucet handle came off in my hand, hardly any WIFI which kept going out anyways, TV had only 4 or 5 local stations, the door latch was just hanging by one screw..... it felt like this was a sinking ship and the crew was doing all they could to keep it afloat.
One of the hotel workers there told me the hotel was in the hood, but the new owner is trying to change it into a family hotel.
I had borrowed my sister’s expensive car and I felt nervous having it park there in the lot and would move it in front of my room when that spot became available. One night there was a lot of noise outside my room so I opened the door a bit to take a peek outside to see what the commotion was all about, only to see a "crack whore" who was out there soliciting looking back at me. I quickly shut the door and stayed inside my room and only looked out the curtains to check on my sister’s car the rest of the night.
I stayed there for five nights and because of the delays caused by the winter storm Thor, I was charged almost five-hundred dollars for the room caused I didn’t book it seven days in advance. 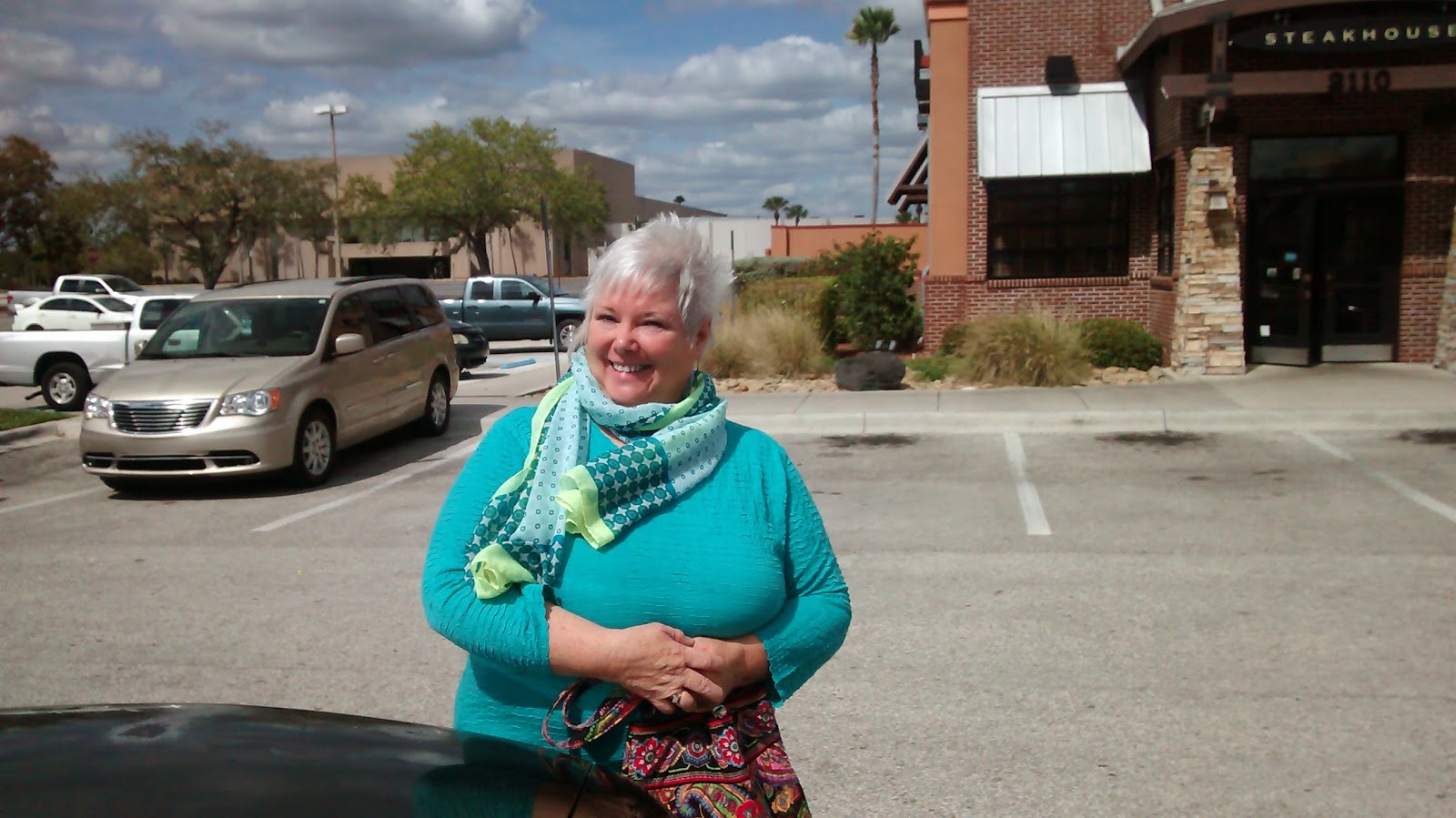 On Thursday my sister had a doctor’s appointment and I would have the day free, so my FaceBook buddy Bonnie Tilley-Khan came all the way over from where she lives Lithia, Florida to take me out to lunch at a steakhouse down the street. We chatted for a long spell and I signed her book I wrote for her. She gave me a care package that was most appreciated.
I continued to visit my Sister and her family until the finale day came when Mitch dropped me off at the Greyhound bus terminal and I was off again on another four days adventure because of the storm. When you have very long waits at bus station you usually find people you can trust to watch your stuff and you watch theirs while you use the restroom and such. I met some very nice people along the way back to Tucson; there was Connie a grandmother from somewheres in Texas; Chris, Dalton and a couple of host of others whom I trusted. There was the Clown Faced Man: looked like he gotten mighty drunk one time in his younger life and was taken advantage of by some evil tattoo artist, but then again maybe he had it done to himself; I kinda avoided him anyways.
We got all the way to Birmingham and the storm was so bad they wanted all to go back to their origin of departure; mine being Tampa to wait out the storm. I wanted to stay in Birmingham just in case the roads opened, but my two traveling companions convinced me to just make it back to Montgomery Alabama where there is plenty of fast food places and maybe a hotel we could chip in to stay at. Well it was better than staying in Birmingham where we weren’t wanted anyways. So about forty or so folks got back on the bus headed back to where they first came and we, my traveling companions and I, to wait out the storm in Montgomery; a two hour ride. We got to Montgomery and each of us took turns going to get food at a gas station convenience store next door. I asked if anyone wanted hamburgers from the McDonalds, my treat. Chris said that he was told Greyhound would be feeding us here so I didn’t go; if I had I would have missed the bus (Connie, bless her heart, said she would make them hold it until I had gotten back with the burgers) because not more than an hour after our arrival at Montgomery we were told that the roads had cleared to Houston and there was a bus leaving in ten minutes to Birmingham. There were only about ten of us out of the original forty or more on that bus and it made me and my traveling companions wonder how many people went all the way back to all parts of Florida.
After the bus left Birmingham it took another route than the one I originally took (Interstate 10) to get to Tampa and stopped at a bus station somewheres I don’t remember where. That’s when I met “The Station Fairy”. I was kinda giddy from all the traveling and loss of sleep and when I enter the station there was a security guard checking people with a wand. I tried to go around him remembering my bad experiences at Tallahassee, but he stopped and turned to me and said, “Stop I have to wand you,” to this I replied, “Warn me about what?” which in turn he replied, “No I have to wave this wand over you,” and I came up to him and asked, “Are you the station fairy?” Then I told him it was a long bus ride and I was just having a little traveling delirium. He laughed and waved his wand over me and said, “You may pass into the magic kingdom now.”
Somehow we finally made it to Houston and then Dallas and said our goodbyes to each as we went our separate ways. I was dishearten to leave Connie at the station, she had to wait another 10 hours for her bus, and mine was leaving. As I stood in line to board I saw her sitting by all herself and I almost decided to stay with her and wait for another bus, but it has already been a long journey for me and she would be home before I would anyways.
Posted by Bob DeLoyd at 4:39 PM