June 20- Facebook post: My CERT team got called to support the firefighters up near the fire in Pioneertown, So I won't be on FB today or even maybe tomorrow...
(Little did I know that I’d be there around 11 days)

"The Lake Fire was reported just before 4:00 pm on June 17, 2015. The cause of the fire is under investigation. It is approximately 23,199 acres in size and burning in timber. It is currently 21% contained.
Mandatory evacuations include: Areas along Hwy 38 east of Angelus Oaks to Onyx Summit, Barton Flats, Seven Oaks, South Fork, Heart Bar, Rainbow Lane, Burns Canyon, and Rimrock. There is a voluntary evacuation in place for Pioneertown..
Highway 38 is closed between Angelus Oaks to Lake Williams.
All Hiking Trails into the San Gorgonio Wilderness Area have been closed due to the proximity of the fire to these trails. The Pacific Crest Trail (PCT) is closed from Whitewater Preserve to Onyx Summit.
State Highway 38 will remain closed indefinitely due to reduced visibility and firefighting operations.
The fire remains active in the northeast. Today the fire made a push northwards toward the Rainbow Lane Area but at this time no structures have been lost.
Approximately 360 campers were safely evacuated from the Camp Oakes in the Lake Williams Area on June 24th. This was a precautionary evacuation due to the large number of campers. The San Bernardino Sheriff's Department is handling the evacuations. The American Red Cross Evacuation Center is located at the Big Bear Community Church, 40946 Big Bear Blvd, in the city of Big Bear. CERT (Community Emergency Response Teams) are on-scene to meet campers at the evacuation center and help reunite campers with parents.
The south side of the fire continues to burn in steep and rocky terrain with minor growth downhill hitting areas of unburned trees and grass that ignite and then burn again downhill. Additional crews have been inserted into the Ten Thousand Foot Ridge and will proceed toward the eastern Forest Boundary.
Resources on scene include:
103 engines
3 air tankers
2 DC-10 VLAT (Very Large Air Tankers)
18 helicopters
4 support planes
54 crews
19 water tenders
8 dozers
1874 personnel assigned to the fire
There have been four firefighter injuries.
Fire management is under Unified Command with Cal Fire, San Bernardino County Sheriff, San Bernardino County Fire, Big Bear Fire Department and California Highway Patrol. The Incident Command Post is located at Big Bear High School." 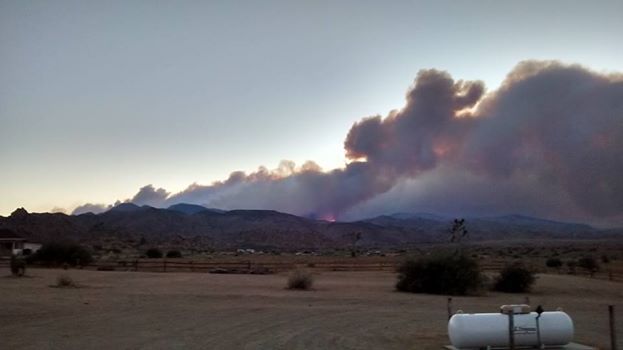 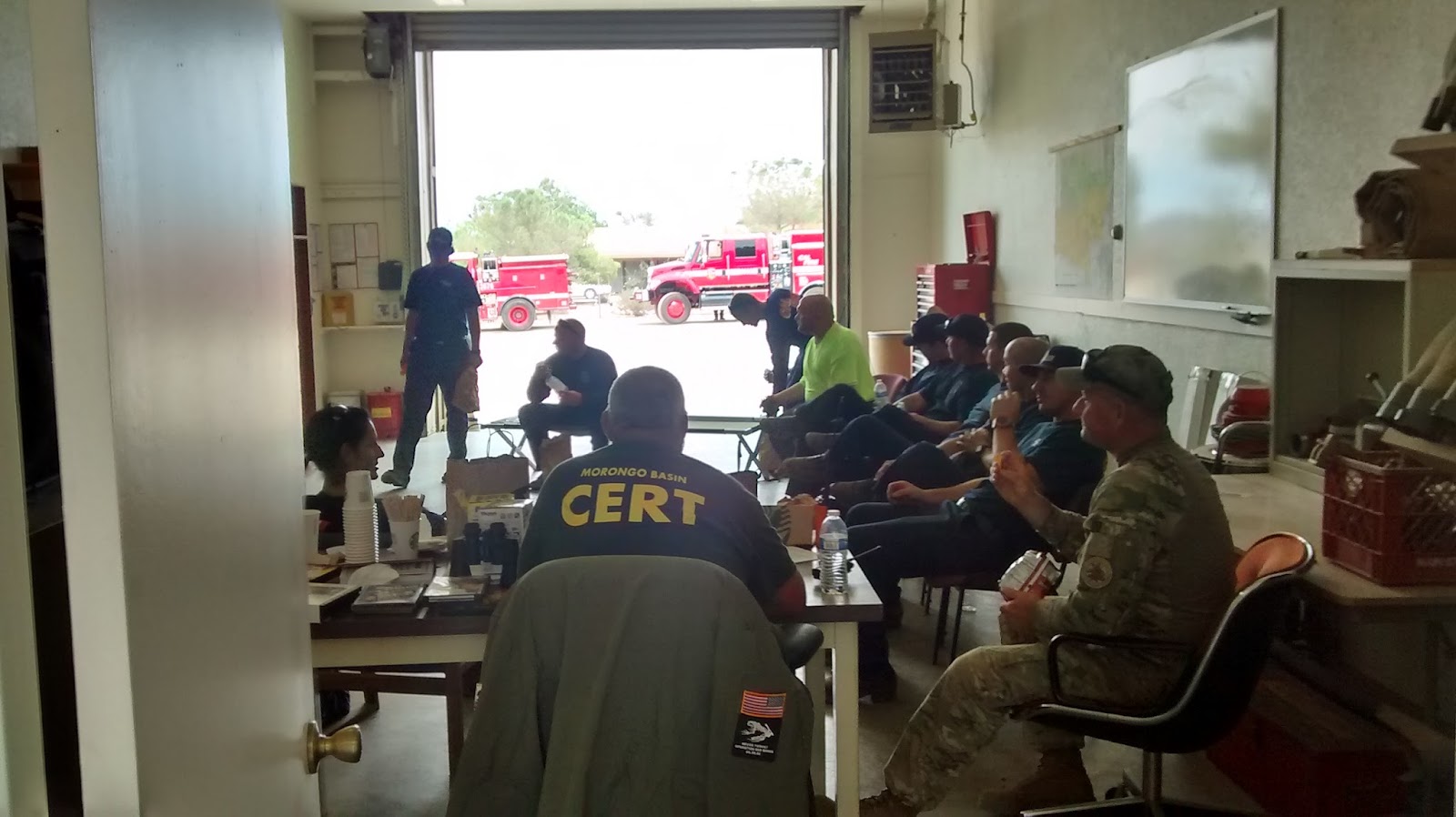 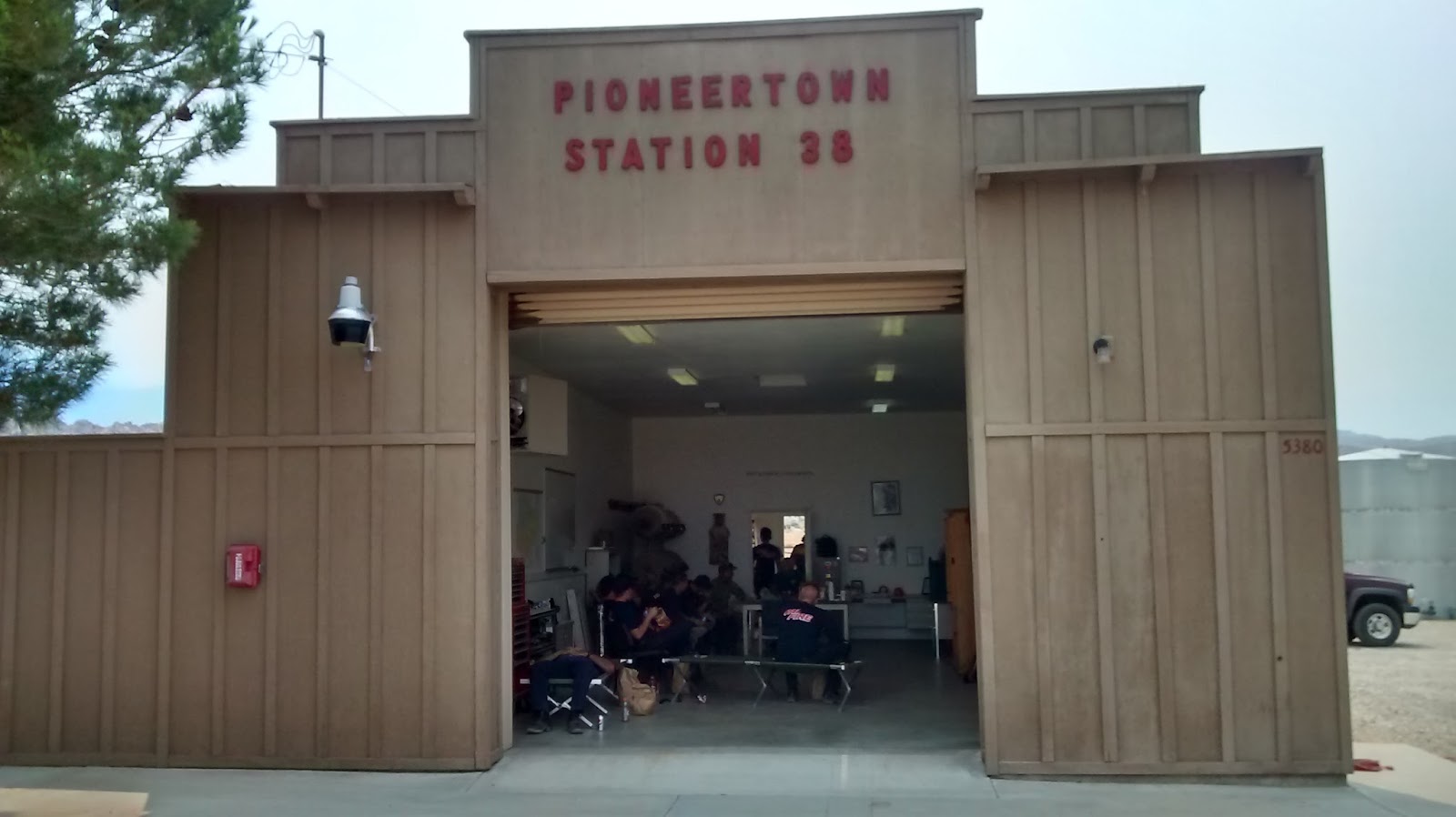 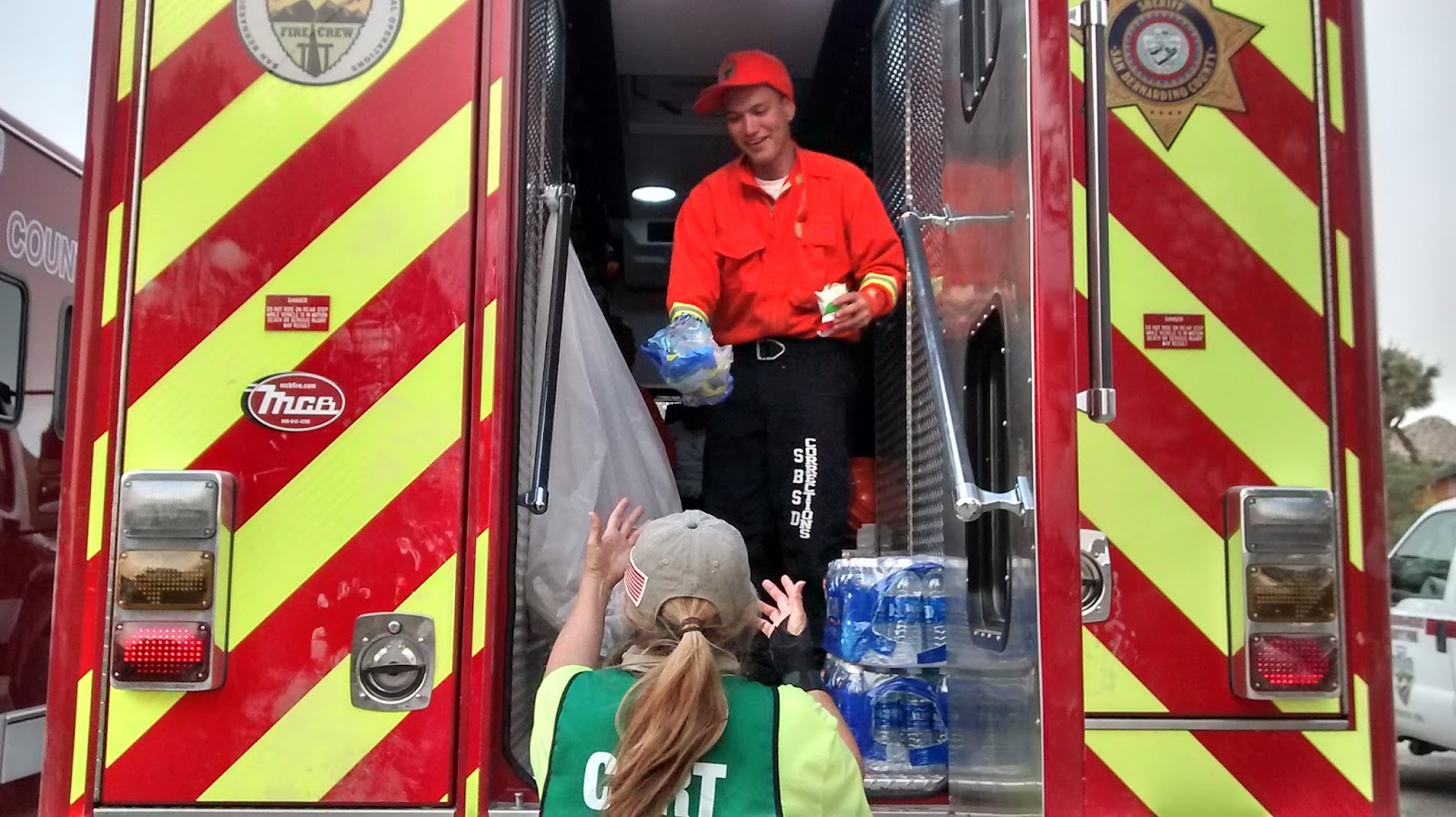 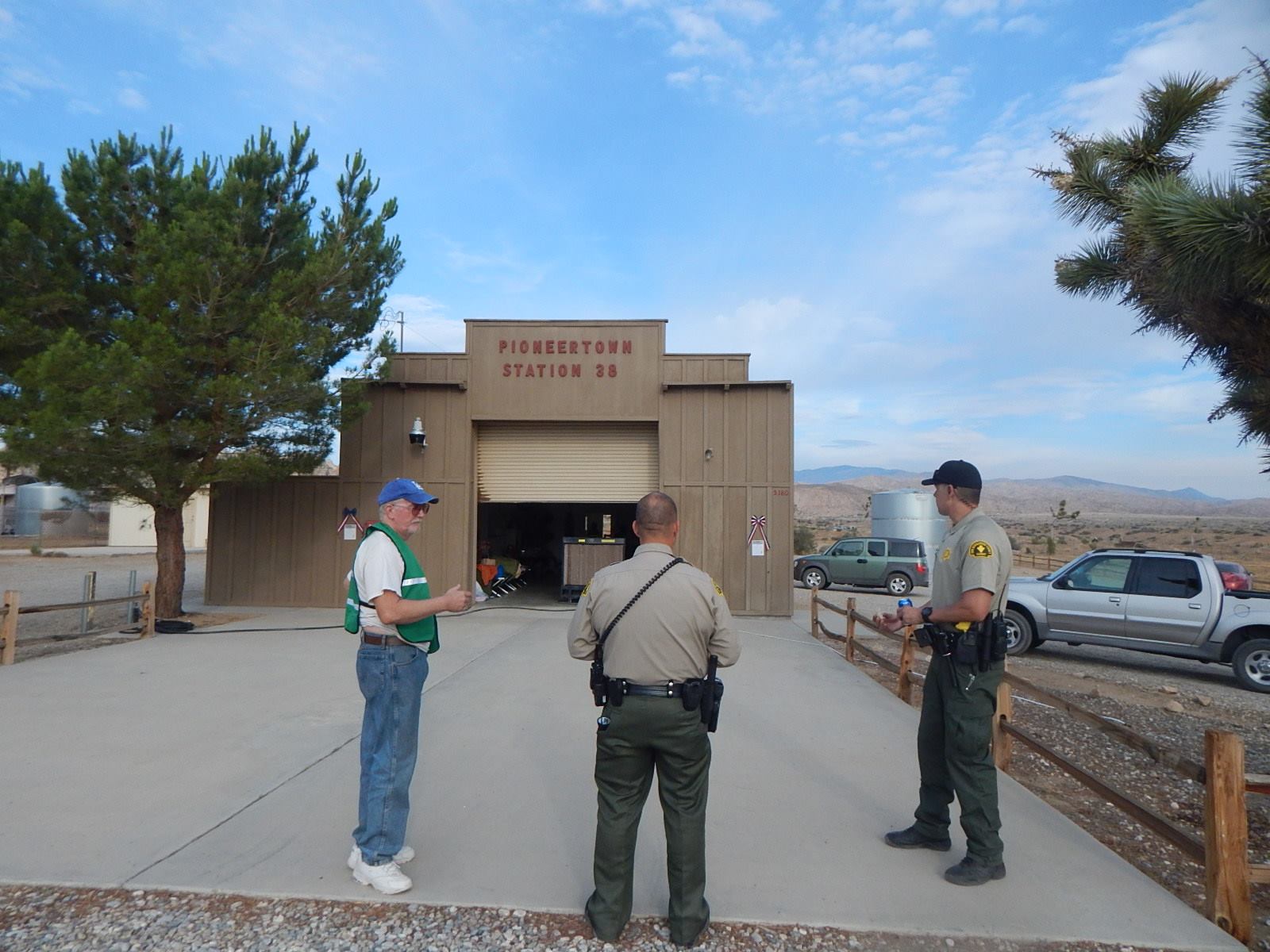 I am a CERT volunteer up in Pioneertown helping with the Lake Fire. I've been working 14 hour shifts at the fire in support of the Firefighters supplying them with food and refreshments and helping with evacuations of Rimrock and Burns Canyon. In no time was I in any danger.

Below is a newspaper clipping from the Hi-Desert Star: 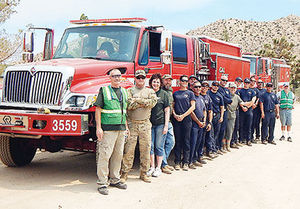 Some Morongo Basin CERT members pose with Cal Fire firefighters outside of Station 38.
Posted: Friday, July 3, 2015 5:03 pm | Updated: 12:10 pm, Thu Jul 9, 2015.
By Josh Allen Hi-Desert Star | 0 comments
PIONEERTOWN — The Morongo Basin Community Emergency Response Team has been training for an incident like the Lake Fire since 2010.
From 9 a.m. June 19 until Tuesday, members of the local CERT chapter had a chance to put their training into action.
The team opened Station 38 in Pioneertown, and 52 volunteers spent over 1300 hours manning it around the clock.
They provided food, water, rest, information and support for firefighters and residents of Pioneertown.
Morongo Basin CERT Coordinator Nancy Guinn said the team did a great job in their first live action.
“It was the first time that we worked together in a live support-team environment,” Guinn said. “We did an outstanding job with teamwork, logistics and planning.”

This pic was taken on June 25 when there was a call for mandatory evacuation of Burns Canyon and Rimrock, and a voluntary evac for Pioneertown. Helping setup a Red Cross shelter at Copper Mountain College. 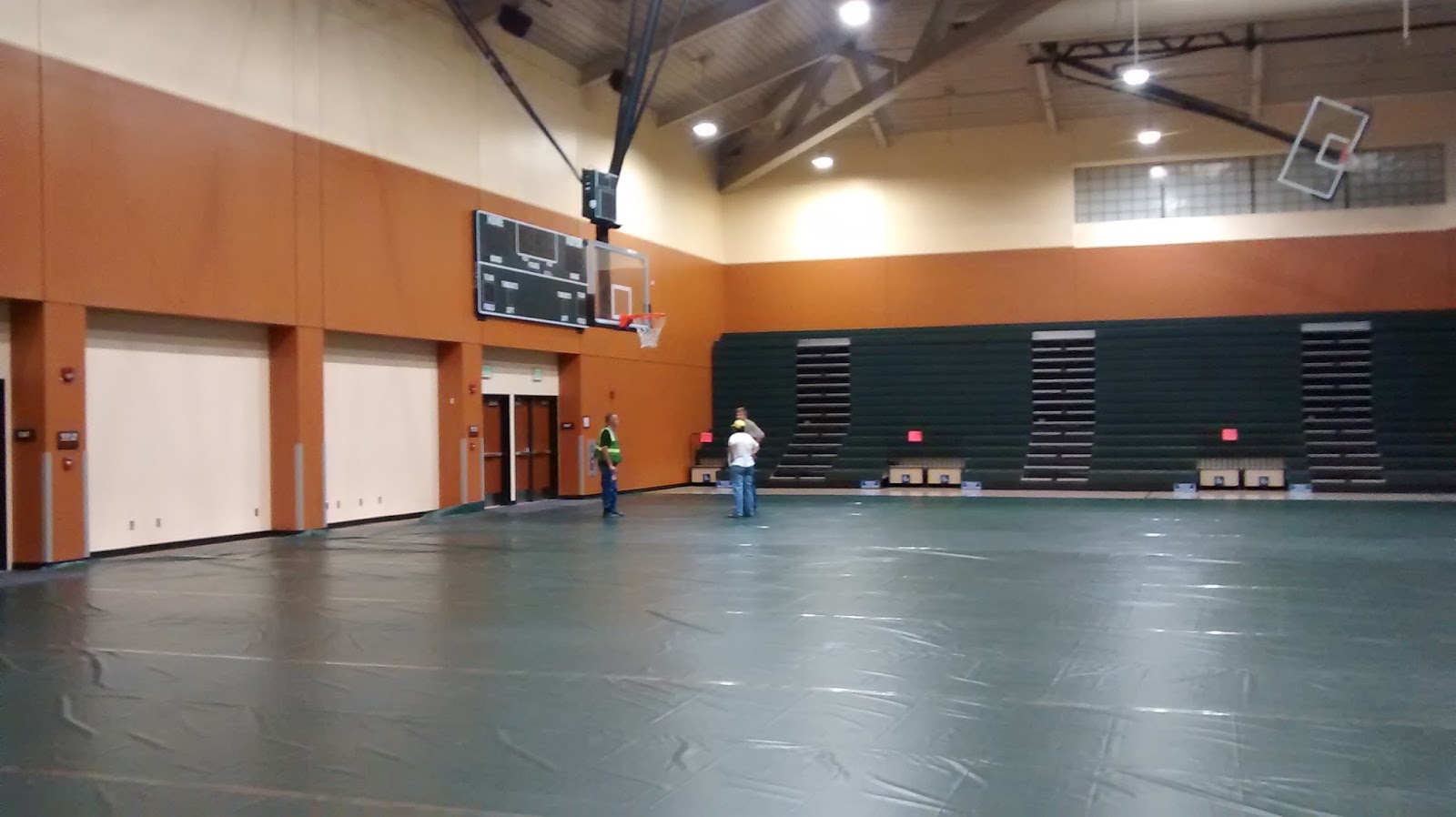 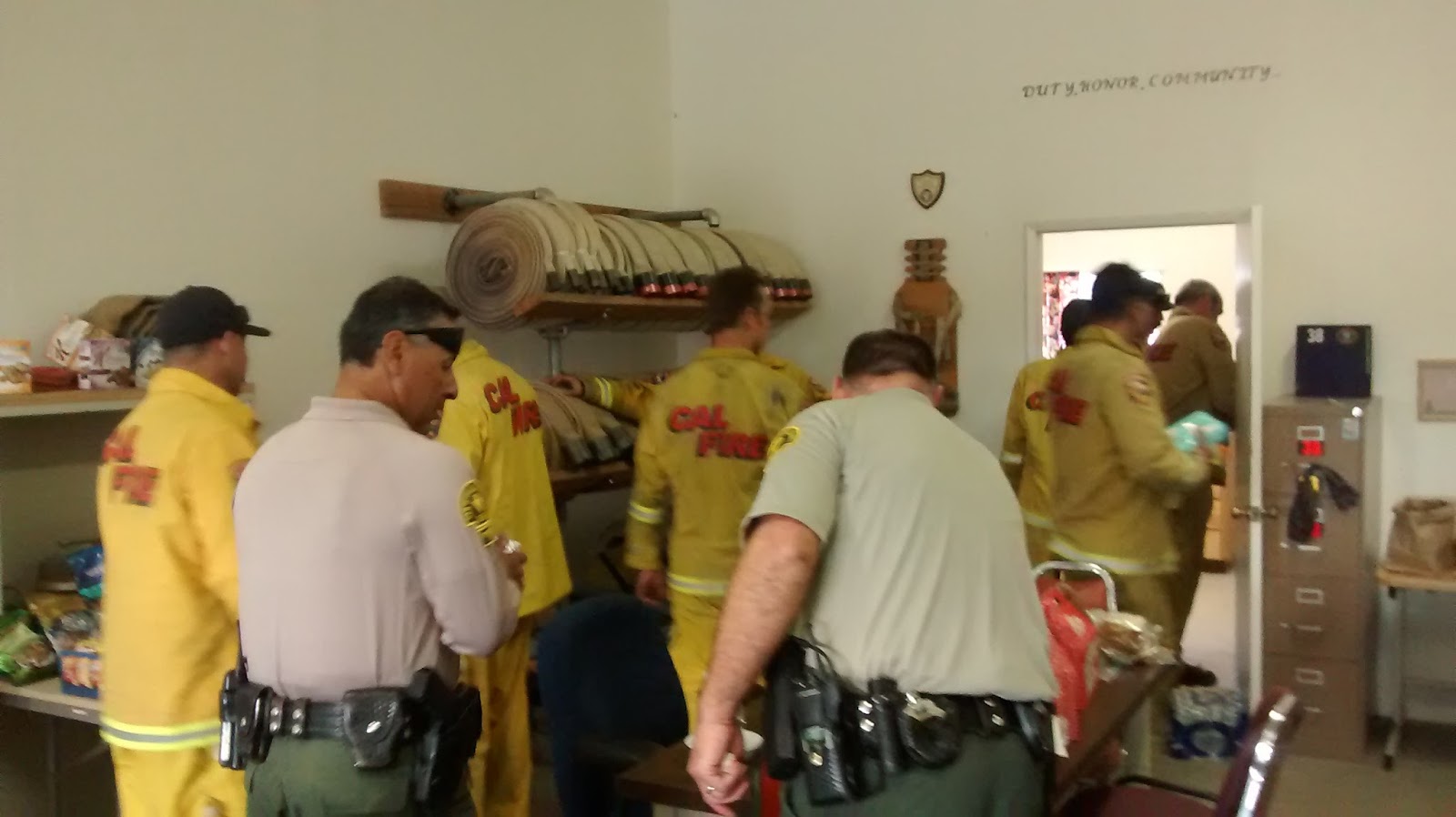 Tuesday 30- Well it’s official, it is all over now!
I got the call at home this morning just before I went to bed after spending the night at Firehouse 38 in Pioneertown that we were closing down our operations there and I wouldn't have to come in tonight.
I have met some incredible folks these past 11 days and feel mighty proud how everyone came together from the Firefighters who did a magnificent job of putting out the Lake Fire, CERT volunteers who opened the firehouse so those fighting the fire had a place to eat and rest, Sheriffs who manned the roadblocks to keep the lookie-loos out of the way of firefighters and evacuees, families and business donating food and drinks. I feel mighty proud how everyone came together in a time of need, but that's what we do as Americans isn't it......
By the way I’m the old man standing at the back of the line to the right, behind all these wonderful people.