Thursday 01- helped buffalo folk load Chief onto trailer, he was easy cause I got him to follow me into trailer by using carrots and slammed the door behind him- Joel came by with supper “chicken-cacciatore” and it was good!
Friday 02- helped buffalo folk load Sally into trailer, she was harder than Chief and I had to rope her horns and then we wrench her into trailer- Ron D. came by for a jaw and we got a call from the buffalo folk that Dion got rounded up and put in jail by the sheriff while following trailer back to Lancaster in car he needs us to go and pickup on HWY 247, so we went and picked it up- later that day Dion is sprung from jail and I pick him up and drove him back here- John M. dropped by to give me a door buzzer he thinks I need.
Saturday 03- buffalo folk call and ask me to come and help get Buffy into trailer cause they are having a hard time doing it. I spent the next 3 hours trying to help them get her in by she is just dang stubborn and we were afraid that she may hurt herself or have a heart attack in the hot sun, besides, Scott was pressed for time; he had to go to San Diego for a week and had to return the trailer to its owners that day, so I told them that I’d take care of Buffy for the next week till they got it together- Brenda dropped off her Gateway Profile2 all in one computer for repairs. FD and CD don’t work, boots up to Windows Me but the display is degraded and only fills a quarter of the screen.
Sunday 04- fed buffalo- 12 Noon John M. and I go to Morongo Valley in my truck to pickup a refrigerator he needs. We spent most of the day helping the lady who is giving the refrigerator to John with her burglar alarm. Her name is Annette, she used to be a famous model in the 40s’, and lives in a very big house that is built on a mountain that has had its top cut off for it. The driveway to the house is in between two mountains very narrow with a 200 foot drop off on either side (reminded me of Frankenstein’s castle, only desert style)- finished Brenda’s computer, got the display working right and recovered the USB functions buy reinstalling Windows Me and was able to plug in my external CD drive and copy files and drivers over from the recovery disks, but the FD and CD won’t work. I tried many things to get them to work, BIOS settings, different drives, and even tried Window settings in the system device IDE, but I didn’t think that was the problem. Since this is an “All In One” computer it is setup different than a regular desktop. I had spent over 4 hours on it to get it running the best I could without tearing it down and spending more time on a machine which is way out of date and maybe causing it to not function at all. So I ran it over to where she lives and told her she should get a new one before this one stops functioning altogether- Mike from Hermosa Beach calls.
Monday 05- fed the buffalo.
Tuesday 06- got up early and painted some Snow Coat on the roof- fed buffalo- wrote my column and sent it to the newspaper.
Wednesday 07- helped John M. get the refrigerator into his house- went to Andrew’s and we worked on a very old computer that had an IDE primary harddrive failure. We replaced the CPU and messed around with the BIOS till we got it working. We really need to stop working on these old computers, this one was a 233mhz processor with wires hanging all over its insides and dust clogging up the power supply fans- Fed buffalo. 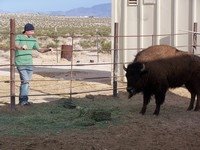 Thursday 08- went to town to get some carrots for the buffalo and some supplies for me. Got propane at Bar Lumber and innertube for my small motorcycle. While I was putting groceries into my truck Channel 2 came up and asked if they could interview me on what I thought about the death of Abu Musab al-Zarqawi's death, I told them that it was good news for our troops and that I hoped that his death would bring them home soon- fed buffalo with Andrew and got some pictures of him feeding her-
Friday 09- fed buffalo- saw fire in the mountains due west of here and it was up around Big Bear- worked on website for the weekend update.
Saturday 10- fed the buffalo- went to meeting at the community center for the Community Watch Program. Seemed to me a little fishy that the Board of Directors said we could only ask, “permitted questions” of the Sheriff’s Officers or they would stop the meeting. Now what was that about? – Mac’s computer has gone caput and I told him to bring it by and I’ll have a look see. Looks like a bad power supply, I checked all the connections, made sure all the boards and ram were seated, and told him to take it to his friend that is lending it to him to have it replaced. I will get one of mine ready for Mac to use until he gets it back. 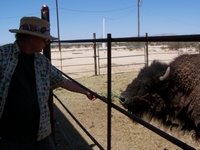 Sunday 11- Ron D. came by with some vittles and a video for me. I took him over to feed the buffalo and took some pictures- reloaded XP on one of my computers for Mac to use as a loaner and took it over to him- Seime came by for a visit and we sat and ate fruit and crackers- Mike from Hermosa Beach calls.
Monday 12- fed buffalo- John M. comes by with some nick knacks- Jeff shows up with onions and I share some lime chicken and rice with him.
Tuesday 13- fed buffalo- cleaned up around the house- wrote column for the newspaper and sent it in.
Wednesday 14- fed buffalo- took tire off small motorcycle for repair- Scott called and he is in Yucca Valley with trailer and will be here to pickup buffalo in 20 minutes. Scott, Jason, and me spent the next 3 hours getting Buffy into that dang trailer and we weren’t going till we did. With a little heckling from me I got Scott to get out there and lasso Buffy by the horns and then we wrenched her into the trailer and Scott immediately drove off with her to Lancaster- called my friend Mike from Hermosa Beach- started writing this blog for posting.
Thursday 15- got tire patched on small motorcycle and filled it up with air and took it for a ride- Joel came by with dinner, a concoction that he made-up which was very good- Jeff called around 9pm needing a ride from the hospital, but my rear lights don’t work for night driving and told him to catch a taxi and drop him off at the bottom of Coyote Valley Road where the pavement ends and I’d pick him up there.
Friday 16- messed around the house fixing a few small things that otherwise wouldn’t hold my attention as I have so many bigger things to do- finished my “PC Trouble Shooting” that I’ve been taking online.
Saturday 17- worked most of the day finding the best way of converting a PDF to HTML and finally succeeded in finding a program that did it pretty well at the least expense. This is for a job I may bid on for a LA newspaper website, editor is named David.
Sunday 18- jawed with Scott and Dion for a few hours talking about our reckless youth, well their reckless youth; I’ll just let them believe I am guiltless- sent samples of the html document that was converted to David.
Monday 19- Raymond S. came by and asked me about that old VW bus that I have sitting in the front yard and ended up trading the tire changer, that I got from John M. a few weeks ago, for a camper shell Raymond had at his home that fit on my truck perfectly- Stoney came by with some food- John M. called to ask if we can take my truck tomorrow and pickup some furniture, I told him ok- John M. called again needing a jump for his car so he can take his grandson back home in Adelanto. I came with my jumper cables and we found that his battery wouldn’t hold a charge, I told him I had a spare at home he could use till he got it replaced and sent them on their way.
Wednesday 21- Joel came by with lunch; double cheeseburger and onion rings- fixed flat on my bicycle.
Thursday 22- George Chadwick called to say thanks for the story I wrote about Joan’s passing and we talked for a while. I will write another story on her with the info I just got from George.
Friday 23- just plain hot but I exercised anyway- worked a little around the house and read.
Saturday 24- Mike called from Hermosa Beach- Dale called from Landers- went down and talked to Scott and Dion while they put in the bathroom tile- Brenda called and asked if I’d work on her sister’s computer, I told her to bring it down tomorrow.
Sunday 25- Debbie brought over her old Packard Bell 333mhz, 256meg of ram, system is running Win XP. CD and floppy drive didn’t work and has a virus. Replaced CD with one she brought over and got it to work. Tried system restore but it didn’t have enough space on harddrive.
Monday 26- continued to work on Debbie’s computer. Tried to do what I could to keep her XP but it is like putting a jet engine in a Model-T Ford. She didn’t mind if I installed Win98SE so I did and did the updates and downloaded driver for her modem. Replaced the floppy drive and messed with the BIOS and got it working. Installed anti-virus, anti-spyware and a firewall and called her to pickup.
Tuesday 27- John m. and I took the truck to Annette’s home in Yucca and picked up couch and washer- wrote column and sent it to newspaper. 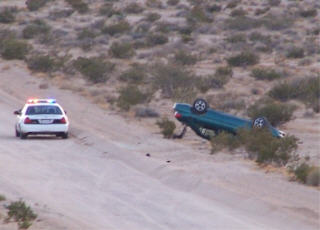 Wednesday 28- had dinner over at Mac’s home with his family and neighbor Chuck. Mac cooked us up something special called rippers.  Played some kind of game with Dennis where you hit a piece of flat plastic around on a table with air coming up through little holes, he won the first one buy 2 points, I won the second by 5- it rained some up here and we had some thunder so when I heard a load noise I thought it was that, but it turned out to be a car that was speeding and hit the brim of the road and flipped over a few times and came to rest on its top. I talked to the officer who was at the scene and he told me that the driver had left before he arrived. I heard latter that the driver’s first name was Keith. I took some pictures and put one on the website.
Thursday 29- played around with old laptop and took off Win2000, which was making it run too slow, and installed Win98- Joel called and said he has a bad problem with his computer, I told him to bring it by.
Friday 30- worked on Joel’s computer and had to uninstall McAfee VirusScan that comes bundled with AOL. The program would start when the machine booted and run the CPU at 100 percent so nothing else could run- visited Scott for a while- Mike from Hermosa Beach called- Microsoft is discontinuing support for Win98-ME so I downloaded all the critical updates from their site and saved them to disk for future installs.